Days of Our Lives Spoilers Next 2 Weeks: Jordan Back from Bayview – Sarah Falls For Xander – Desperate Anna Begs Kristen 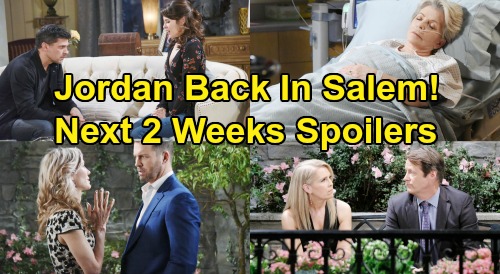 Days of Our Lives (DOOL) spoilers for the next two weeks tease that some hot drama’s ahead in Salem. During the week of September 9-13, Vivian Alamain (Robin Strasser) will confess to her son. She’ll tell Stefan DiMera (Brandon Barash) about shooting Kate Roberts (Lauren Koslow) and burying her in the cemetery, so Stefan will lash out over the risky scheme.

However, Vivian will insist Kate’s dead and gone. She’ll feel confident she won’t get caught, but DOOL spoilers reveal she shouldn’t be so sure! Later, Stefan will fill Gabi DiMera (Camila Banus) in on Kate’s ordeal. Gabi will wonder if Kate’s really dead considering Vivian’s usual strategy of burying people alive. She’ll also want to call the cops and take Vivian down.

Stefan will maintain that Kate has passed on, but he won’t want to rat out his mother. Meanwhile, an alive Kate will poke through the dirt and drag her bloody, filthy self to the hospital. Kate will just barely make it! She’ll end up collapsing as soon as she takes a step off the elevator, which will leave Kayla Johnson (Mary Beth Evans) and Jennifer Horton (Melissa Reeves) in shock.

Kayla won’t have a clue what happened to Kate, but she’ll be determined to save her with Haley Chen’s (Thia Megley) help. Days of Our Lives spoilers say word of Kate’s survival will make it back to Vivian, so she’ll be equally determined to snuff Kate out!

The good news is Kate will manage to whisper Vivian’s name to Kayla and hopefully imply that Viv’s guilty. The bad news is Kate will remain in critical condition. During the week of September 16-20, Vivian will try to finish Kate off. She’ll be obsessed with getting revenge, so some gripping moments are coming up.

Days spoilers say Vivian won’t succeed, but Will Horton (Chandler Massey) will eavesdrop on Vivian and Stefan’s chat later. That could tip him off to some big secrets between them. Lucas Horton (Bryan Dattilo) will also head back to Salem as Kate’s condition grows grim. This will definitely be a difficult situation for Kate’s loved ones.

Over with Jordan Ridgeway (Chrishell Hartley), she’ll make her comeback and set up a new story for Rafe Hernandez (Galen Gering). Rafe will sign off on Jordan’s release from Bayview and take legal responsibility for her. He’ll want David to have his mom if she’s stable enough to be in his life, so he’ll quickly get on board.

Other Days of Our Lives spoilers say Anna DiMera (Leann Hunley) will beg Kristen DiMera (Stacy Haiduk). She’ll insist Kristen has to help her get Tony DiMera (Thaao Penghlis) out of legal trouble. It looks like Kristen will consider it, but only in hopes of impressing Brady Black (Eric Martsolf).

Finally, Sarah Horton (Linsey Godfrey) will be moved by Xander Cook’s (Paul Telfer) deep devotion. There’s a good chance Xander will vow to pose as the father of Sarah’s baby. He may assure Sarah that he can straighten up and be a family man for her sake.

Sarah could develop some strong feelings if Xander keeps this sweet side of himself going strong. We’ll give you updates as other Days details emerge. Stay tuned to DOOL and don’t forget to check CDL often for the latest Days of Our Lives spoilers, updates and news.