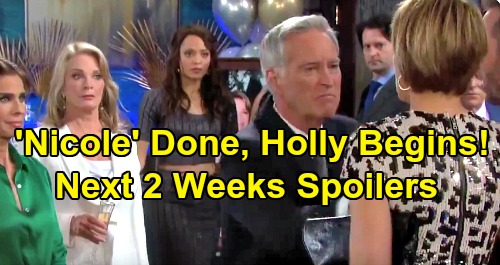 Days of Our Lives (DOOL) spoilers for the next two weeks tease that Kristen DiMera’s (Stacy Haiduk) secret will start to unravel. During the week of August 19-23, Sonny Kiriakis (Freddie Smith) and Will Horton (Chandler Massey) will dig for clues. They’ll look through Xander Cook’s (Paul Telfer) room in hopes of finding enough dirt to get rid of him.

DOOL fans can expect some startling proof to surface. Will and Sonny will realize Xander took payments from Kristen. That’ll lead to more questions about whether this is legit or perhaps a fake name someone’s using. Sonny and Will still think Kristen is dead, so they’ll be unsure what this really means.

However, Days of Our Lives characters rarely stay dead, so Will and Sonny will at least consider the option that Kristen’s alive. After Brady Black (Eric Martsolf) gets updates on that possibility, it’ll give him something to mull over.

Other Days spoilers state that John Black (Drake Hogestyn) and Marlena Evans (Deidre Hall) will celebrate their anniversary at Doug’s Place. Several party guests will suspect something’s up with “Nicole DiMera” (Stacy Haiduk). There’ll also be whispers about Kristen along with a phone call from Eli Grant (Lamon Archey). Thanks to Xander, the Salem PD will know Kristen was his boss.

John will consider this news with Hope Brady (Kristian Alfonso) before the final puzzle piece clicks in place. It’ll suddenly hit them that Kristen’s hiding in plain sight. Days of Our Lives spoilers say John will manage to unmask “Nicole,” but she’ll aim a gun at Marlena Evans (Deidre Hall) in desperation. This anniversary shindig is sure to bring some stunned faces!

During the week of August 26-30, Days of Our Lives spoilers say Xander will confirm Holly Jonas’ (Harlow and Scarlett Mallory) survival. He’ll get blasted for his role in faking her death, but at least he’ll choose to be honest now. Kristen will hope to make a deal that keeps her out of prison, but she’ll run into some opposition from Jack Deveraux (Matthew Ashford).

Eric Brady (Greg Vaughan) will seek Jennifer Horton’s (Melissa Reeves) help in convincing Jack to see the light. Since Eric will fear for Holly, he’ll think agreeing to Kristen’s terms is the right call. Whether Kristen gets her deal or they find a workaround, a trip to Chicago to hunt for Holly is coming up. Eric, Jennifer and Jack will hope to find some crucial info there.

Afterward, Tony DiMera (Thaao Penghlis) will be arrested as a horrified Anna DiMera (Leann Hunley) processes the blow. She’ll eventually learn what Tony was up against and advise him to offer up the location of Kristen’s hostages. Speaking of those hostages, Days of Our Lives spoilers say Stefan DiMera (Brandon Barash) and Gabi DiMera (Camila Banus) will be rescued by two surprising heroes.

Will and Sonny’s mission will lead them down an interesting path. They’ll eventually figure out where the captives are, so Gabi and Stefan will go free before long. Their next blow will come through Kate Robert’s (Lauren Koslow) CEO job and her upcoming decision to move in the mansion.

Finally, Chloe Lane (Nadia Bjorlin) will get a shocking offer, which will probably be too good to pass up and lead to her exit. Chloe’s stint on DOOL will begin winding down soon, so this offer may be something like an opera gig that takes her far away from Salem. Days of Our Lives spoilers say Chloe will give Brady updates and get his advice, but she’ll ultimately have to trust her own instincts.