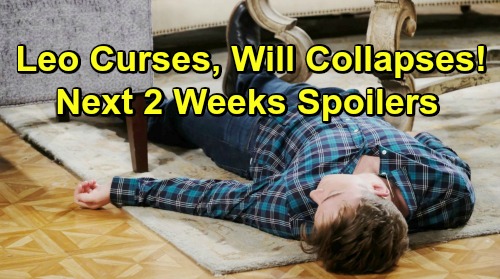 Days of Our Lives (DOOL) spoilers for the next two weeks tease that some scary situations are coming up in Salem. During the week of March 25-29, Leo Starke (Greg Rikaart) will curse Will Horton (Chandler Massey) with the evil eye. Sonny Kiriakis (Freddie Smith) will think that’s ridiculous until he finds Will out cold on the floor later. He’ll call for paramedics to take Will to the hospital ASAP.

Meanwhile, Claire Brady (Olivia Rose Keegan) will team up with Eve Donovan (Kassie DePaiva). They’ll come up with a strategy to expose Haley Chen’s (Thia Megia) marriage sham and put it in motion. Claire will eventually make a secret recording. She’ll soon have Tripp Dalton’s (Lucas Adams) confession that he’s just marrying Haley to keep her in the country.

Over with Sarah Horton (Linsey Godfrey), she’ll come clean to Rex Brady (Kyle Lowder) about kissing his brother. Sarah will assure Rex that Eric Brady (Greg Vaughan) wasn’t responsible. She’ll take all the blame and hope to minimize the damage to their bond.

Of course, Sarah wouldn’t admit any of this without a good reason. It turns out she’ll be trying to eliminate Brady Black’s (Eric Martsolf) leverage. Days spoilers say Brady will want Eric’s help with getting through to Chloe Lane (Nadia Bjorlin). He’ll blackmail Eric with the lip lock, so Sarah will tell Rex the truth to eliminate Brady’s power.

Next, Jordan Ridgeway (Chrishell Hartley) will summon Rafe Hernandez (Galen Gering) to share a secret. During the week of April 25-29, Rafe will seek confirmation on what Jordan tells him. It looks like Jordan may have a secret child out there. Days of Our Lives spoilers state that Rafe will take a trip to California. He’ll come back with big news, so that could mean he’ll bring a kid along with him.

Lani Price (Sal Stowers) will become obsessed with a baby named David soon after, so it makes sense that it could be Jordan’s. DOOL fans will recall that David was also the name of Lani’s deceased son, so Eli Grant (Lamon Archey) will be a bit weirded out. He’ll witness Lani’s instant bond with the kid and grow concerned.

Other Days spoilers say Will’s going to battle mysterious medical issues. Sonny will do his best to figure out the problem, but he won’t have much luck. Elsewhere, Abe Carver (James Reynolds) will grow closer to Sheila Watkins (Tionne “T-Boz” Watkins). These two bicker a lot, but there’s definitely attraction under the surface.

While Sheila and Abe heat things up, Claire will be put on the hot seat. JJ Deveraux (Casey) will get his hands on the lighter and wonder what Claire’s been up to. He’ll have some suspicions about that cabin fire, so Claire frantically attempt to stay out of trouble.

Later, Claire’s problems will get worse thanks to her new partner in crime. Days of Our Lives spoilers say Eve will deliver a shocker at Jack Deveraux’s (Matthew Ashford) rally. She’ll let Claire know she’s deviating from their plan and infuriate her in the process.

It sounds like the next two weeks will be packed with drama. We’ll give you updates as other Days details emerge. Stick with DOOL and don’t forget to check CDL often for the latest Days of Our Lives spoilers, updates and news.