Days of Our Lives Spoilers: Nicole Deserves Another Chance – Is Judgmental Eric Being Too Hard on His True Love? 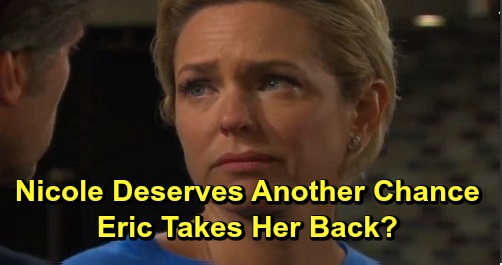 Days of Our Lives (DOOL) spoilers tease that Nicole Walker (Arianne Zucker) will prepare for a blue Christmas without Eric Brady (Greg Vaughan) by her side. Nicole made a passionate plea for Eric’s forgiveness, but he just can’t find it in his heart to get past what she did. DOOL fans know Nicole made some excellent points during that tense conversation.

Eric drove drunk and killed Daniel Jonas (Shawn Christian), but Nicole was still able to forgive him for it. Let’s take a moment to really let that sink in. Nicole was truly in love with Daniel at the time – and she later learned surrogate Chloe Lane (Nadia Bjorlin) had given birth to her daughter with Daniel. Holly Jonas (Harlow and Scarlett Mallory) will never know her real father because of Eric. Never!

But Eric, who still knew Mackenzie “Mickey” Horton and was able to interact with her regularly, can’t get past Nicole’s paternity secret? If it weren’t for Nicole, Eric would still be in the dark right now. Sarah Horton (Linsey Godfrey) is Mickey’s mother – at least until a baby swap twist potentially changes that. Shouldn’t Sarah be the one who’s mainly held accountable for keeping Eric from THEIR daughter?

Of course, Days viewers get that Sarah’s already suffering since Mickey has cancer. We don’t want Eric yelling at Sarah and making her pain worse, but it’s still hard to watch him embrace the lying baby mama in this scenario while he acts like Nicole is pure evil. Nicole wasn’t the ringleader of this secret. Sarah and Xander Kiriakis (Paul Telfer) did the heavy lifting here.

If Eric even thinks about getting back together with Sarah, it’ll be absolutely appalling. Mickey’s cancer shouldn’t excuse Sarah’s deception. It wouldn’t be fair to forgive and love Sarah despite the paternity lie when he can’t do the same for Nicole, who – and we can’t stress this enough – isn’t Mickey’s mom! It was Sarah who hid the truth about her baby from the get-go.

Nicole is just someone who got caught up in all this and made a mistake she wishes she could take back. She at least tried to fix that mistake by coming clean. In doing so, Nicole has given Eric a chance to be there for Mickey during this medical crisis. All things considered, don’t you think Eric is being a little too hard on Nicole?

This holier-than-thou side of Eric isn’t a good look for the character. It’s understandable that Nicole’s previous mistakes are part of why he’s so hesitant now, but Eric has made mistakes of his own. Every single character has on Days of Our Lives.

Nicole isn’t some special case who deserves to suffer more. She’s already suffered plenty! The woman has had multiple miscarriages. She was nearly killed by Xander and kidnapped by him on a separate occasion. Nicole was blackmailed out of Salem, forced into a horrible marriage, presumed dead in a warehouse fire, had her identity stolen by Kristen DiMera (Stacy Haiduk), etc.

And those are just some of Nicole’s more recent hardships. That’s really just the tip of the iceberg. Nicole’s had a rough life and has always tried to do the best she could. She’s got a caring heart deep down, so Eric needs to remember that.

It just seems like Nicole’s getting unfair treatment in this story so far. It did take Nicole a long time to move past Eric’s role in Daniel’s death, but that was arguably a far worse offense. Let’s hope that once Eric has some time to cool off, he’ll finally see the light.