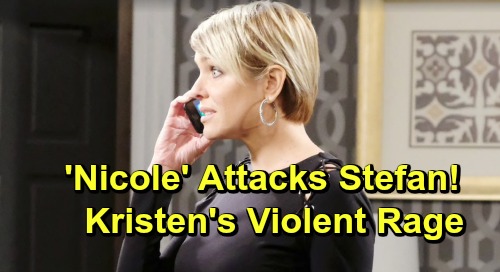 Days of Our Lives (DOOL) spoilers tease that “Nicole Walker’s” (Arianne Zucker) new job will come with more drama. She muscled her way in at DiMera Enterprises, but she’s got a lot on her plate right now. That’s because this is really Kristen DiMera (Stacy Haiduk), and she’s been having to put out some fires lately.

Ted Laurent (Gilles Marini) was the first problem that had to be dealt with. It wasn’t long until Kate Roberts (Lauren Koslow) found herself on the problem list, too. Xander Cook (Paul Telfer) didn’t kill them like he promised, so Kristen’s mess will get even bigger soon. Hope Hernandez (Kristian Alfonso), Rex Brady (Kyle Lowder) and Brady Black (Eric Martsolf) will all follow up on growing suspicions.

Kristen desperately wants to win Brady back, but she can’t do that if everyone finds out she orchestrated Holly Jonas’ (Harlow and Scarlett Mallory) “death”. As Kristen’s stress level skyrockets, Days spoilers say she’ll take it out on the people she works with. “Nicole” will put her position at Basic Black on the line by pushing Stefan DiMera’s (Brandon Barash) buttons.

DOOL fans know “Nicole” is already on thin ice. She was nearly fired when she didn’t show up for her first day of work, but she had more pressing matters to tackle. Abe Carver (James Reynolds) spoke up for “Nicole,” but he may not be able to do much during the week of July 8-12.

Days of Our Lives spoilers say Stefan won’t appreciate the button-pushing, so he’ll push right back. He’ll enrage “Nicole,” so she’ll target him with a vicious attack! It won’t help that “Nicole” and Gabi Hernandez (Camila Banus) tend to spar. That trend will continue and could leave Kristen at the end of her rope. She’s obviously got some anger management issues, but Kristen won’t think she’s the drama queen here.

Stefan will be stunned by the extent of “Nicole’s” rage and perhaps wonder if there’s more to the story. Days of Our Lives spoilers say Kristen hopes to take over DiMera one day. Will Stefan figure out that “Nicole’s” got an agenda and truly fire her? Will Kristen have to focus on a different path to happiness or will she play the part of grieving mom again and wiggle out of this?

It looks like some shockers and shakeups are brewing in the DiMera family. We’ll give you updates as other Days news comes in. Stay tuned to DOOL and don’t forget to check CDL often for the latest Days of Our Lives spoilers, updates and news.