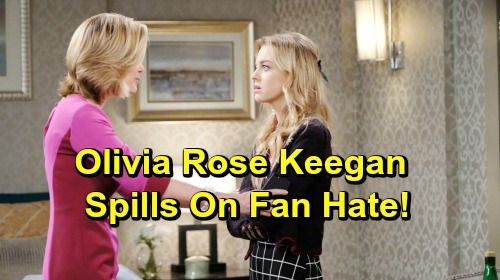 Days of Our Lives (DOOL) spoilers has some insights to pass on from a popular DOOL actress. Olivia Rose Keegan, who portrays the conniving Claire Brady on the NBC soap, recently opened up to Soap Opera Digest about some of the negative comments from fans that she’s received.

It’s pretty common for soap stars to get personally criticized by fans for the actions of their characters. Some fans can’t separate fiction from reality, and it seems that Olivia has experienced this first-hand. Her character Claire has some negative traits that make for great soap drama, but sometimes fans don’t realize that Olivia isn’t anything like her alter-ego.

Olivia told Soap Opera Digest that “I get a lot of people who can’t separate me from the character. They tweet me saying ‘You’re the most annoying person in the world. Leave Salem. We hate you.’” Those kinds of comments must be exceedingly difficult to read on a daily basis.

But Olivia seems to take it in stride. She noted: “That means that I’m doing my job, because you’re not necessarily supposed to like Claire. It took a while to realize that. But now it’s a feeling of ’Thank you. That’s what I’m supposed to do.’”

It’s great that Olivia has such a great attitude about the whole thing, especially since Claire is about to go off the deep end on DOOL. Claire has always been a schemer, and she famously entered into a deal with Ben Weston (Robert Scott Wilson) to break up Ciara Brady (Victoria Konefal) and Tripp Dalton (Lucas Adams).

But lately, Claire has turned things up a notch. She’s now scheming with Eve Donovan (Kassie DePaiva) to get Haley Chen (Thia Megia) deported so Haley won’t be a threat to her relationship with Tripp. It’s pretty intense, but the really big reveal recently has been that Claire started a fire last year that was intended to kill her best frenemy Ciara.

Claire’s certainly doing some wild and desperate things, and it’s easy to see why people don’t always care for what the character is doing. But it is always important to remember that the actors are separate entities from their characters, and chances are if you love to hate a character, it means that the actor is doing a fantastic job in the role.

Are you excited to see what Claire does next? Stay tuned to DOOL and don’t forget to check CDL often for the latest Days of Our Lives spoilers, updates, and news.