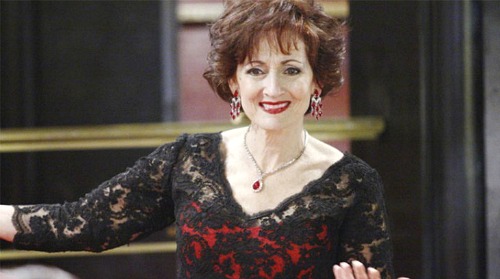 Days of Our Lives (DOOL) spoilers has some news to pass on about the role Robin Strasser will be playing on Days. Back in February, CDL reported that Robin would most likely be playing the role of a recast Vivian Alamain, and we can now confirm that to be the case.

Of course, Vivian was last portrayed by Louise Sorel, when her character was shot and supposedly killed by Kate Roberts (Lauren Koslow). We say “supposedly” killed because Vivian later turned up in a mysterious dark room where she recognized her captor.

And on a later occasion, viewers saw the initials “V.A.” on a room at the Memphis warehouse where Kristin DiMera (Stacy Haiduk) and Xander Cook (Paul Telfer) were holding various “patients” being treated by Dr. Wilhelm Rolf (William Utay). Vivian apparently needed some rehab and possibly further treatments from Dr. Rolf to get back on her feet.

But somehow, it seems that Vivian will make her way back to Salem in the coming months. When we last saw Vivian, she was awake and alert, and certainly didn’t seem to have the serious memory problems that Jack Deveraux (Matthew Ashford) or Will Horton (Chandler Massey) have been afflicted with, nor did she have the serious disabilities that EJ DiMera (last played by James Scott) apparently had.

Vivian will likely make a big splash when she returns, in typical Vivian style. She will have a big score to settle with Kate, since Kate shot her in cold blood. In fact, Kate might be in some serious legal trouble when Vivian returns, if Vivian remembers the shooting and can testify that Kate deliberately shot her.

And Vivian will get to reunite with her beloved son Stefan DiMera (Brandon Barash). It will be interesting to watch the mother-son duo interact, as well as a very new experience, since the last time the two characters interacted they were portrayed by two entirely different actors.

Are you looking forward to seeing Robin’s take on Vivian Alamain? Stay tuned to DOOL and don’t forget to check CDL often for the latest Days of Our Lives spoilers, updates, and news.