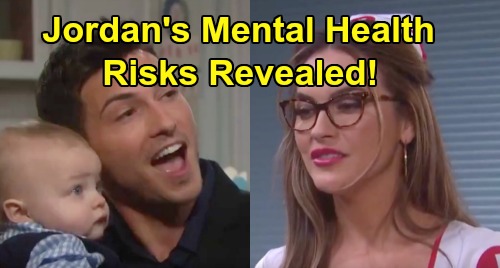 Days of Our Lives spoilers confirm Chrishell Hartley is reprising the role of Jordan Ridgeway. The last time we saw her, she tried to burn Ciara Brady (Victoria Konefal) alive. With her being released from Bayview, does Ben have a reason to worry for Ciara’s safety? DOOL Head writer Ron Carlivati discussed the character, and a fall preview clip gives us insight into what will happen with the storyline.

The physical therapist suffered a mental health crisis, to say it mildly. Even though her reasons didn’t make any sense, she felt justified. In Jordan’s mind, she was saving Salem from Ben by killing people – and framing Ben for the crimes.

Days of Our Lives spoilers reveal Jordan’s release from the psychiatric ward will worry Salemites. They have good reason to be concerned. It doesn’t seem like Jordan spent too much time in the crisis stabilization unit. Could she really be better after such a short period of treatment? Not only do people have Ciara to worry about, but there is an innocent baby involved as well.

Ben and Jordan are siblings, much closer than most brother/sister relationships. Jordan is a bit older than Ben and practically raised him. In fact, to protect him from Clyde (James Read), Jordan moved Ben around quite often until they reached Salem.

It is understandable why Ben feels that he owes Jordan his support. She just wasn’t his sister, but his caregaver, his guardian, the one person in the world who kept him safe from Clyde’s parental terrorism. On the other hand, Ben is in love with Ciara and will do anything to keep her safe. Plus, Ben has a full-time job working for the DiMera family. He is head of security which means he really has no personal time.

It is possible that there will be a theme to Jordan’s storyline and it could mimic what happened with Ben. After his release from Bayview, nobody would give him a chance. He really tried to be a good guy, but the people of Salem would never forget his murderous deeds. Things are finally turning around for him now, but could something similar happen with Jordan?

It’s likely that Jordan has every intention of staying mentally stable. However, if she gets the same treatment Ben did, she could crack. This would put Ciara back in danger once again, as well as baby David and everyone else in Salem. Head writer Ron Carlivati spoke to Soap Opera Digest about the storyline.

“Because Ben is the suspicious minded one, you start to wonder is he being paranoid or does he have a legitimate reason to be afraid for Ciara’s safety?”

Claire and Jordan Cause Salem Mayhem?

No one is truly paranoid in Salem. Past storylines prove that. It seems that Jordan might fake being well, but behind the scenes, she will be back to her old tricks. This is confirmed with a fall promo clip. It shows Jordan dressed up as a nurse in Claire Brady’s (Olivia Rose Keegan) hospital room. The two are definitely going to be working together to cause some Salem mayhem.

Days of Our Lives spoilers reveal Jordan cannot be released into society unless she has a guardian. Rafe (Galen Gering) already stepped up and looked after her son, David. Rafe will once again try to do the right thing and help his ex-girlfriend. He will offer to be Jordan’s guardian so she can be close to her son. However, Rafe just sees Jordan as she was back then — not the person she has become in recent years. He could be wearing blinders, which puts everyone at risk.