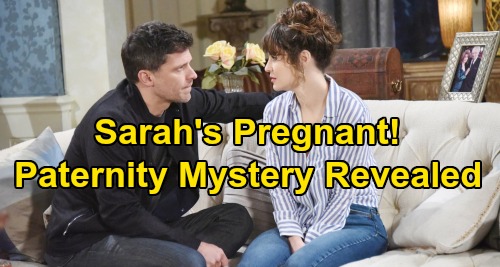 Days of Our Lives (DOOL) spoilers tease that Eric Brady (Greg Vaughan) has plenty of shockers in his future – and Sarah Horton (Linsey Godfrey) has plenty of them, too. Eric has reassured Sarah that she’s his one and only now, but that’s only the case while Nicole Walker (Arianne Zucker) is out of the picture. The fact that Nicole’s alive and a reunion is possible will naturally be a game-changer.

On August 30, Eric and Sarah will have an honesty hour. They’ll get serious about what the latest Nicole developments mean for them as a couple. Eric may admit he can’t just give up on true love. Likewise, Sarah can’t live in constant fear that Eric will go running back to his ex. This isn’t a healthy relationship, so they may acknowledge that and decide it’s best to break up.

Regardless, Eric will finally find Nicole during the week of September 2-6. He’ll likely enjoy a happy reunion with Holly Jonas (Harlow and Scarlett Mallory) soon after. Days of Our Lives spoilers say Eric will be relieved to reconnect with the real Nicole at last. Of course, she may be a little miffed that he didn’t figure all this out sooner!

Eric and Nicole have always had a deep connection, so she may wonder why he couldn’t see the truth. Fortunately, Eric should be able to explain that. He may point out how much Nicole loves Holly and suggest he could buy that she’d lose it after her daughter’s death. Nicole’s behavior never made sense to Eric, but crazy behavior is kind of to be expected when you lose the one thing that matters most.

Eric and Nicole could be on the verge of getting their happily ever after. They may reunite and agree to be a beautiful family with Holly. Alas, things are rarely that simple in Salem! Days of Our Lives spoilers say Sarah will have a startling realization on September 5. It’ll leave her deeply unsettled, so we have to consider the possibility that Sarah will realize she’s pregnant.

Here’s where things could get really interesting. Would the father be Eric or Rex Brady (Kyle Lowder)? If Days wanted to think outside the box, they could even do a little rewrite and show a fake flashback that makes Xander Cook (Paul Telfer) an option. Sarah hasn’t hooked up with Xander recently as far as anyone knows, but wouldn’t a three-way paternity mystery just be delicious?

However, we’ll stick with what DOOL’s given us for now. Sarah has slept with both Rex and Eric lately, so either one could be the “baby daddy.” There’s no guarantee Sarah is indeed pregnant or that she’d carry a potential kid to term, but it seems like the logical, easy way to cause “Ericole” drama – which there’s bound to be more of.

Do you think Sarah will realize she’s pregnant? Will this be another reunion hurdle for Eric and Nicole? We’ll give you updates as other Days news comes in. Stay tuned to DOOL and don’t forget to check CDL often for the latest Days of Our Lives spoilers, updates and news.