Days of Our Lives Spoilers: Sarah Touched By Xander’s Devotion – New Couple Together After Time Jump?

BY hellodrdavis on September 7, 2019 | Comments: one comment
Related : Days of Our Lives, Soap Opera, Spoiler, Television 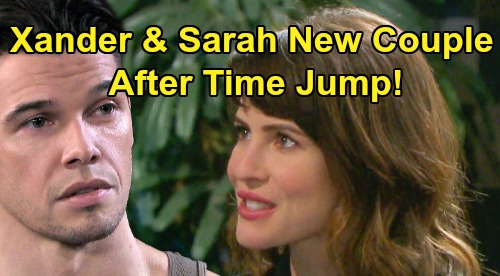 Days of Our Lives (DOOL) spoilers tease that Sarah Horton (Linsey Godfrey) is in quite the pickle. As DOOL viewers know, she’s just found out that she’s pregnant, and she’s pretty sure that the father is Eric Brady (Greg Vaughan). Normally, that would be cause for celebration, but there’s a big wrinkle, as Nicole Walker (Arianne Zucker) has just been revealed to be alive and well. Sarah can pretty much see the writing on the wall, and she knows that her relationship with Eric is about to come to an end.

Indeed, DOOL spoilers indicate that Eric will soon officially break up with Sarah. Ultimately, Sarah just won’t be able to compete with Nicole; after all, Nicole is the love of Eric’s life, and there’s just no way that he would walk away from her. And it doesn’t appear that Sarah is going to reveal to Eric that she’s pregnant anytime soon. She probably won’t want him to make a decision about their relationship based on her pregnancy, so it looks like she’ll stay mum for now.

Right now, Kayla Johnson (Mary Beth Evans) is the only person with whom Sarah has confided about her bun in the oven. It looks like she’ll keep the pregnancy to herself for a while, while she determines exactly how she wants to handle the situation. At some point, Eric’s going to have to find out about the pregnancy, but it seems that Sarah just won’t know how to tell him, now that he’s back together with Nicole and Holly Jonas (Harlow and Scarlett Mallory).

But there will be someone who will wind up firmly in Sarah’s corner during this difficult time, and that’s Xander Kiriakis (Paul Telfer). It’s no secret that Xander is sweet on Sarah. He was present during Sarah’s morning sickness episode recently, and he even suggested that perhaps she didn’t have the flu but was “preggers.” Of course, he was joking at the time, but it seems that in the days to come he’ll start to wonder whether Sarah may really be pregnant.

Of course, we should also note that the Sarah pregnancy story is coming right around the time that TPTB at DOOL are planning a never-before-seen event in daytime TV – a one-year time jump. That’s right, in some fashion the show is going to progress into the future by a year, and that means that Sarah will have had her baby within that year. And it could also mean that we could see a full-fledged Xander/Sarah relationship have formed in that year! That’s a couple exciting possibilities.

Of course, nothing’s set in stone here, and it’s always possible that Sarah and Xander aren’t together after that year time jump, but our bet is that they will be. TPTB really seem to be leaning toward “Xarah” as a couple, and lots of fans are clamoring to see them ultimately get together. Will Xander step in and have helped Sarah throughout her pregnancy? And how will Eric feel about Xander taking an active role in his baby’s life?

Do you think that Xander and Sarah will be together after the time jump? Stay tuned to DOOL and don’t forget to check CDL often for the latest Days of Our Lives spoilers, updates, and news.