Days of Our Lives Spoilers: Stefan Struggles To Hide Gabi Obsession From Chloe, But Fails 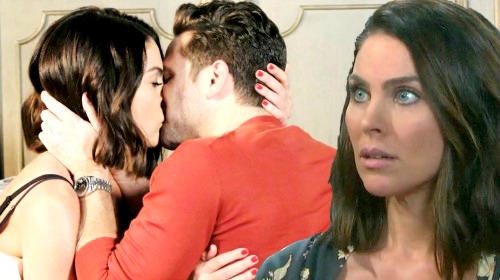 Days of Our Lives (DOOL) spoilers tease that things will really start to heat up between Stefan DiMera (Brandon Barash) and Gabi Hernandez (Camila Banus). Gabi’s got a scheme going with Brady Black (Eric Martsolf), and it’s all about seducing Stefan and using his strong desire for a family against him. Brady wants to take Stefan down and keep him away from Chloe Lane (Nadia Bjorlin), and he figures that Gabi is the perfect vehicle to make that happen.

According to Days of Our Lives spoilers, Gabi will make some inroads with Stefan. The two will share another kiss, and it looks like things might go a bit farther than that between them. Gabi will lose a button in the process of trying to seduce Stefan, so we should see things get pretty hot and heavy between them.

But Stefan will have a problem. Although a big part of him is clearly attracted to Gabi, another side of him can’t stand her. And he really is starting to care for Chloe, who he sees as a real possibility for his future. Stefan wants a stable home life and family above anything else, and he sees Chloe as his ticket to that type of future.

DOOL spoilers say that Stefan will have real difficulty hiding his growing obsession for Gabi from Chloe. He’ll want to protect his budding relationship with Chloe at all costs, but Gabi will start to make that nearly impossible. She has a tendency to show up at the mansion all of the time and interfere with any chance at intimacy that Stefan has with Chloe.

Plus, Gabi’s going to be turning up the seduction heat on Stefan big time. It will get harder and harder for Stefan to hide what’s going on between himself and Gabi. Chloe’s pretty perceptive, and she’ll start to pick up on the energy between Stefan and Gabi. Plus, DOOL spoilers say that she’ll find that button that Gabi loses when she’s with Stefan!

Stefan will have to scramble to explain that to Chloe, and she’ll probably see through the inevitable excuse that Stefan gives her. Chloe is already hesitant about jumping into a romance with Stefan – she wants to wait until after she knows she’s safe from El Fideo’s (Andoni Gracia) cartel to think about dating again. But if she finds out the truth about Stefan and Gabi, then all bets will be off.

Do you think that Stefan has any chance with Chloe at this point? Stay tuned to DOOL and don’t forget to check CDL often for the latest Days of Our Lives spoilers, updates, and news.