BY hellodrdavis on November 13, 2019 | Comments: one comment
Related : Days of Our Lives, Soap Opera, Spoiler, Television 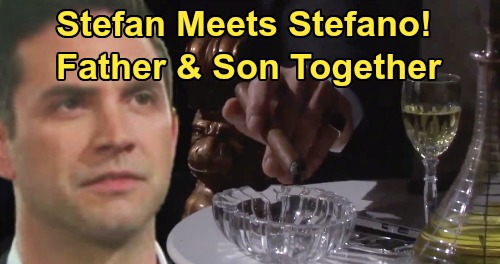 Days of Our Lives (DOOL) spoilers tease that an exciting situation could be developing on the show. As you might already be aware, the DOOL winter promo promised a huge return in the form of Stefano DiMera (last played by Joseph Mascolo). The promo clearly showed a older man’s hand wearing the DiMera ring, while Princess Gina Von Amberg (Kristian Alfonso) addressed the man directly, calling him “Steffy,” which is her pet name for Stefano.

In addition, DOOL spoilers say that Chad DiMera (Billy Flynn) will soon confess to Abby DiMera (Kate Mansi) that he’s been in contact with Stefano. It certainly seems that we’re looking at a Stefano comeback, but whether viewers ever wind up seeing Stefano’s face remains to be seen. Of course, if that happens, then it means that the role would necessary have been recast, since Joseph Mascolo passed away back in 2016.

At any rate, it looks like Stefano will be returning in some form very soon. And that makes us wonder about the return of another DiMera, which Days of Our Lives spoilers indicate is coming in the early part of 2020…that of Stefan DiMera (Brandon Barash). As DOOL viewers will remember, Stefan allegedly died when he was shot by Lani Price (Sal Stowers). Lani was aiming at Stefan’s mother Vivian Alamain (Robin Strasser) but Stefan jumped in front of the bullet to save her.

From there, Stefan appeared to be brain dead, and Gabi DiMera (Camila Banus) even donated Stefan’s heart to Julie Williams (Susan Seaforth Hayes), who was in need of a transplant at the time. Stefan was taken off of life support and a funeral soon followed. But given that Brandon Barash is back on set and filming, it appears that we’ll see Stefan back in action on the show sometime in early 2020.

Of course, how Stefan’s life was saved will take some creative DOOL storytelling, and it will necessarily have to be the case that Julie received someone else’s heart and Stefan was somehow saved. Perhaps it will be the case that Wilhelm Rolf (William Utay) will have stepped in and secretly revived Stefan with his magic serum. Whatever the case, Stefan will be back.

And that leads to a very interesting possibility. DOOL viewers have never seen Stefano and Stefan share the screen together, and in fact that characters never met before Stefano’s alleged death. Given that both Stefano and Stefan will both be back, could viewers get the pleasure of seeing Stefano finally meet his son with Vivian?

It would certainly be an interesting situation with the various DiMeras all on canvas at once. There would likely be a fascinating dynamic between Stefano, Stefan, and Chad. The two brothers might compete not only for the helm of DiMera Enterprises, but also for their father’s approval and affection. And then when you add Kristen DiMera (Stacy Haiduk) and Tony DiMera (Thaao Penghlis) into the mix as well, things could get really interesting.