Days of Our Lives Spoilers: Stefan’s Life Hangs By A Thread – Desperate Gabi Appeals To Rolf To Save Husband 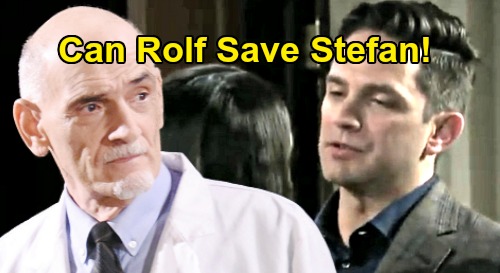 Days of Our Lives (DOOL) spoilers tease that Gabi DiMera (Camila Banus) will soon face utter devastation. As DOOL viewers know, Stefan DiMera’s (Brandon Barash) mother, Vivian Alamain (Robin Strasser) is back in action, and she’s been causing all sorts of problems for her son. But soon, her actions will have tragic consequences.

According to DOOL spoilers, an armed Vivian will find herself cornered by Detective Lani Price (Sal Stowers), and she won’t have a way out. Vivian previously shot and “killed” Kate DiMera (Lauren Koslow), who was on death’s door until Dr. Wilhelm Rolf (William Utay) brought her back to life. It looks like Lani may be in hot pursuit of Vivian for shooting Kate when Vivian turns and holds Lani at gunpoint.

And from there, Days of Our Lives spoilers say that a terrible tragedy will occur. Stefan will happen upon the scene, and at the moment that Lani fires upon Vivian in self-defense, Stefan will leap in front of his mother, saving her life and taking the bullet himself. He’ll then be rushed to the hospital, and Gabi will eventually learn what has happened to her husband.

Unfortunately, Stefan will be in grave condition, and it looks like Kayla Johnson (Mary Beth Evans) will sadly tell Gabi that Stefan is being kept alive by machines and that he has no brain function. Gabi will be devastated as her world comes crashing down and she faces a life without her new husband.

But it seems that Gabi will get an idea, and it will be all about Dr. Rolf. She’ll figure that since Dr. Rolf has brought so many people back to life, surely he should be able to work his magic on Stefan. Days of Our Lives spoilers tell us that she’ll demand that Dr. Rolf find a way to save her husband. She’ll probably argue that this is Stefano DiMera’s (Joseph Mascolo) son, so if anyone should be saved by Dr. Rolf, it should be Stefan!

However, it doesn’t seem that there will be anything that Dr. Rolf will be able to do. Exactly why Dr. Rolf can’t save Stefan remains to be seen, but ongoing DOOL spoilers point instead to Stefan dying and Julie Williams (Susan Seaforth Hayes) getting his heart. Still, Gabi isn’t one to just take no for an answer, so she’ll probably get quite vocal about Dr. Rolf’s duty to find a way to bring Stefan back to life.

It will be interesting to see what unfolds with Dr. Rolf and what ends up keeping him from saving Stefan. Or will there be an unexpected twist in the story that we haven’t anticipated? Dr. Rolf has certainly done his share of secret life-saving treatments over the years, and then kept the “patients” hidden for years on end. You never know what could happen!

Do you think that Stefan will really die, or do you expect a twist in this story? Stay tuned to DOOL and don’t forget to check CDL often for the latest Days of Our Lives spoilers, updates, and news.