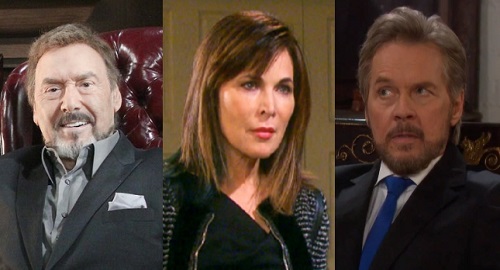 “Princess Gina” has indeed grown closer to John, but it’s nothing more than friendship in his eyes. We’ve also got “Stefano” in Steve’s body. He wants to win Marlena’s heart for himself, but Days of Our Lives spoilers say that’s not going to happen.

Marlena and John’s relationship should be tested, but they’re pretty unshakable at this point. They’ve been through enough to know they’re done bailing on each other. It doesn’t get much deeper than “Jarlena” love!

“Princess Gina” may just be out of luck – particularly since Abigail DiMera (Kate Mansi) will soon be on the verge of discovering her secret. Abigail will work hard to figure out who really pushed Jennifer Horton (Melissa Reeves). She’ll take her mom back to the scene of the crime and hope some memories rise to the surface.

Jennifer may not remember the whole story right away, but a memory flood of those moments could come eventually. Everything could be exposed, including the fact that Hope was transformed into “Princess Gina” over a year ago. With that in mind, Days of Our Lives spoilers say Princess Gina will consider making a quick getaway.

Whether “Princess Gina” bolts or not, she won’t succeed in making John her man. Likewise, Marlena’s probably not going to be receptive to “Stefano’s” advances as Steve. Days spoilers point to “Jarlena” remaining pretty solid, so where does that leave “Stefano” in the coming weeks? Perhaps it could leave him finding love in the arms of another woman – Kate Roberts (Lauren Koslow), his former love.

Kate could use a love interest and has been known to spar with Kayla Johnson (Mary Beth Evans). The idea of putting Kate with “Steve” is perfect for drama’s sake. They wouldn’t be meant to last, but strong DOOL buzz hints that things are still headed in the direction. Kayla could surely be appalled!

It sounds like “Stefano” may ditch his “Queen of the Night” and focus on reigniting a spark with Kate instead. We’ll give you updates as other Days news comes in. Stay tuned to the NBC soap and don’t forget to check CDL often for the latest Days of Our Lives spoilers, updates and news.