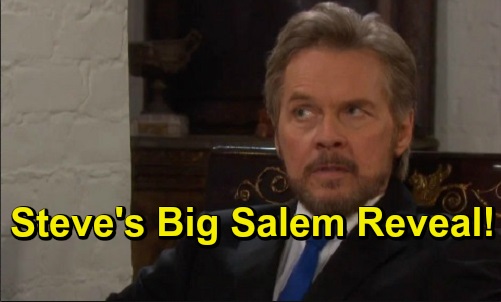 Days of Our Lives (DOOL) spoilers tease that Stefano DiMera aka Steve Johnson (Stephen Nichols) will struggle to keep his secret. He’ll be tempted to at least reveal himself to Marlena Evans (Deidre Hall), but he’ll have to be careful about how he handles it. Stefano will skip one opportunity to show off his new face, but he’ll form another plan. It looks like that plan will also go awry, so “Steve” will ultimately just have to make his presence known.

DOOL viewers can expect “Steve’s” big Salem reveal during the week of December 30-January 3. Of course, the “Steve is Stefano” shocker will have to come later. Everyone should believe this is just plain ol’ Steve at first – and that’s why he’s bound to get an earful. Days fans know Stefano has already done some things to anger Steve’s loved ones.

Jack Deveraux (Matthew Ashford) is furious with Steve for only sending a card when Adrienne Kiriakis (Judi Evans) died. He felt like the least Steve could do was come pay his respects after their sister’s death. Jack was appalled over the way Steve treated Kayla Brady (Mary Beth Evans) as well. Based on the anger Jack was spewing, we wouldn’t be surprised if he punches “Steve” in the face!

Regardless, Days of Our Lives spoilers say “Steve” will face major backlash. “Steve” will have to listen to Kayla’s outburst, too. You can bet Justin Kiriakis’ (Wally Kurth) protective side will come out once “Steve’s” in the picture again. The last thing Justin wants is for “Steve” to cause Kayla more pain, so he might urge “Steve” to just leave. Justin may not think there’s anything left for “Steve” in Salem.

Nevertheless, Stefano will have no intention of bailing on his mission. He’s got his eye on his Queen of the Night, so he won’t be running away. Stefano will also refuse to cower in fear of these people. He’s got his own agenda, so they’ll mostly be a nuisance in his eyes. “Steve’s” blasé attitude will probably just make things worse when it comes to Steve’s family and former friends, but Stefano always does what he wants!