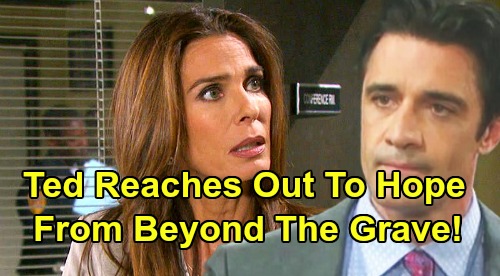 Days of Our Lives (DOOL) spoilers tease that Hope Brady (Kristian Alfonso) will soon get a big surprise. As DOOL viewers know, she recently lost her new beau Ted Laurent (Gilles Marini) when he was killed after a struggle with Tony DiMera (Thaao Penghlis). Of course, Hope doesn’t know all the details about his death yet, and she’s got a lot of unanswered questions about what Ted really did over the past few months.

As DOOL viewers know, Ted was knee-deep in the situation involving Holly Jonas’ (Harlow and Scarlett Mallory) kidnapping and faked death. He didn’t know at the time that Kristen DiMera (Stacy Haiduk) was calling the shots; he just dealt with Xander Kiriakis (Paul Telfer) in the whole matter. Ted was the one who let Xander know when Holly would be alone in the DiMera mansion and vulnerable for a kidnapping.

Ted didn’t seem to have any qualms about his part in Holly’s kidnapping and faked death at the time. He took his payout and went on with life, while letting everyone in Salem mourn her death. But as his relationship with Hope developed a bit, he started feeling guilty about what he did, and when he finally decided that he wanted to cross Kristen and put an end to all the deception, he was killed.

Well, it appears that Ted will have left something behind for Hope. Days of Our Lives spoilers say that Hope will receive a letter from Ted that he wrote before he died. Perhaps Ted wanted to get a few things off of his chest once he got in too deep with Xander and conspired to fake Holly’s death, and he wanted to leave Hope a full confession about what he did.

At any rate, Hope will sit down with Ted’s letter and read his final words. He’ll most likely profess his true love for Hope in addition to any confessions about his behavior. Of course, if he does confess his deception when it comes to Holly’s kidnapping and faked death, that could have some serious ramifications for Hope.

DOOL viewers will remember that Hope was fired as police commissioner by Jack Deveraux (Matthew Ashford), largely because of her decisions that allegedly botched the rescue attempt of Holly and led to her “death.” If Ted used the opportunity in his letter to make a full confession, then that could exonerate Hope and possibly lead to her reinstatement. After all, Hope’s actions in the case were doomed because she didn’t know Ted was working against her.

Of course, since the decision on who holds the commissioner spot is Jack, it’s doubtful that Hope will get her position back, but it’s always possible that she could be accepted back onto the police force at some point and become a detective again. That could be Ted’s final gift to Hope.

At any rate, it will be interesting to see what Ted’s final words to Hope will entail – it looks like he’ll finally come clean and at least offer Hope some closure if nothing else. What do you think Ted’s letter will say? Stay tuned to DOOL and don’t forget to check CDL often for the latest Days of Our Lives spoilers, updates, and news.