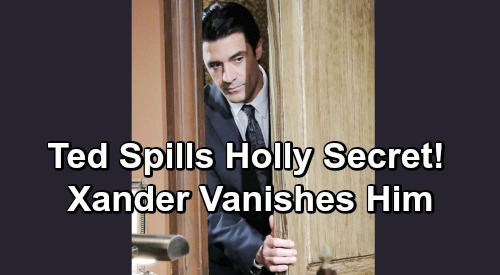 Days of Our Lives (DOOL) spoilers tease that Ted Laurent (Gilles Marini) will have a special gift for Hope Brady (Kristian Alfonso). He’ll hope to move this romance in the right direction, but things won’t go as planned. Hope will refuse to accept Ted’s present, so he’ll certainly feel glum about where they stand. Ted will naturally start thinking of ways to win Hope’s trust and help her see him in a new light.

Later, Hope will get into an argument with Kate Roberts (Lauren Koslow). Ted will be the topic of that argument, so he may worry that the situation’s getting worse. If Ted doesn’t do something to shift Hope’s perspective, they may never be able to move forward. Ted won’t want the rest of Salem poisoning Hope against him. He’ll decide to take action and show Hope that he’s one of the good guys.

The trouble is Ted isn’t one of the good guys at all! He may have a conscience, but that doesn’t excuse his horrible behavior. DOOL fans know Ted worked with Xander Cook (Paul Telfer) to fake Holly Jonas’ (Harlow and Scarlett Mallory) death. He doesn’t realize Kristen DiMera (Stacy Haiduk) is Xander’s partner – and she happens to be wearing a Nicole Walker (Arianne Zucker) mask.

Days spoilers say the fact that Ted’s in the dark will end up being quite crucial. That’s because Ted’s plan will involve playing the hero and making a big confession to “Nicole.” It’ll be tricky since Ted won’t want to face backlash himself, but he might throw blame on Xander.

During the week of June 10-14, Days of Our Lives spoilers say Ted will make his stunning admission and hope for the best. He may drop hints about overhearing something or uncovering some piece of evidence that links Xander to Holly’s “death.”

Ted might suggest that he doesn’t want to give “Nicole” false hope, but it’s worth looking into. He may count on “Nicole” to be desperate enough to do what he suggests. There’s no proof of Ted’s involvement, even if Xander accuses him. Ted may think it’s the perfect plan to save the day and absolve him of guilt.

However, Kristen won’t appreciate Ted’s disloyalty. She’ll realize Ted could be a problem if he sticks around Salem, so she’ll give Xander a dangerous order. During the week of June 17-21, Days of Our Lives spoilers say Kristen will want rid of Ted. She probably won’t give any more details than that.

Kristen may let Xander do whatever he wants – whether that means tossing Ted on an island again or just pumping a bullet in him. It shouldn’t matter to Kristen as long as her problem is gone and she doesn’t have to get her hands dirty. Fortunately, Days doesn’t want Xander to be one of those monstrous villains. He’s a funny, charming one and that’s great news for disappearing Ted.

Hope will have a mystery on her hands after Ted’s vanishing act, so stay tuned. We’ll give you updates as other Days details emerge. Stick with DOOL and don’t forget to check CDL often for the latest Days of Our Lives spoilers, updates and news.