Days of Our Lives Spoilers: The Real Jack Is Almost Back – Jennifer Reveals Surprising Memory Strategy

BY Heather Hughes on May 22, 2019 | Comments: one comment
Related : Days of Our Lives, Soap Opera, Spoiler, Television 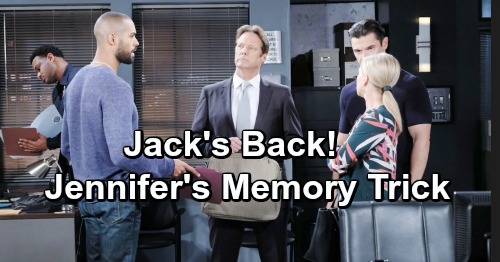 Days of Our Lives (DOOL) spoilers tease that Jennifer Horton (Melissa Reeves) will continue to spar with Jack Deveraux (Matthew Ashford). Jack has fallen so far from the man he used to be, which adds to Jenn’s anger. She finally got Jack back from the dead, but he can’t remember their lengthy history together and has undergone a complete personality change.

Nevertheless, a small piece of Jennifer just doesn’t want to give up on Jack. She can tell that the real Jack’s in there somewhere; it’s just a matter of drawing him out. Days spoilers state that Dr. Wilhelm Rolf’s (William Utay) diary will be found eventually. However, the formula it contains won’t provide help for Jack – at least not without bringing serious consequences.

Will Horton (Chandler Massey) suffered a brain tumor because of the memory serum, so Jack can’t take the same risk. He’ll need another path to total recall. Days of Our Lives spoilers say Jennifer will think she’s got the answer. She’ll come up with a way to jog Jack’s memory this summer, and she’ll be certain it stands a good chance of working.

Unfortunately, Jack won’t be so sure this is the best idea. Jennifer’s strategy will be awfully complicated, so Jack will feel like he should pass. Of course, there may be a deeper reason why Jack will initially balk. Part of him definitely worries about what’ll happen if his memories return. Jack doesn’t know if he can be that person anymore or if that’s what he even wants.

DOOL fans know Jack is on a power trip and he’s got a power-driven wife in Eve Deveraux (Kassie DePaiva). Things are looking up for the mayor as far as he’s concerned, so may not want to rock the boat. Naturally, Jennifer will assure Jack that there’s more to life. She’ll think Jack owes it to himself to uncover his past and decide for himself what his next chapter should look like.

The jig is up after Gabi and Stefan go one round too many. Watch #DAYS, weekdays on NBC. pic.twitter.com/0TxXqXnD9O