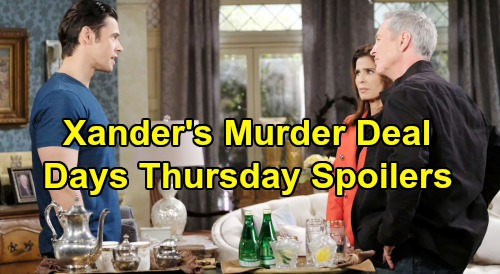 Days of Our Lives (DOOL) spoilers for Thursday, August 15, tease that Ben Weston (Robert Scott Wilson) and Ciara Brady (Victoria Konefal) will be on a mission. They’ll sneak into “Nicole DiMera’s” (Arianne Zucker) room and plan to walk away with some crucial evidence. Ben’s hoping to clear Stefan DiMera’s (Brandon Barash) name with a little help from Ciara, so they’ll start poking around ASAP.

It won’t be long until they hear someone approaching, so “Cin” will duck under the bed and try to avoid getting caught. They’ll be trapped without a way out, but that’ll actually help with their goal. It seems they may find out Kristen DiMera (Stacy Haiduk) is alive thanks to her deal with Kate Roberts (Lauren Koslow) on Friday, so Thursday’s DOOL episode will set up some bombshells.

In the meantime, Days of Our Lives spoilers say Anna DiMera (Leann Hunley) will make a stunning announcement. Tony DiMera (Thaao Penghlis) refuses to walk away from his marriage to “Nicole,” but that’s only because he’s trying to protect Anna. Kristen threatened Anna’s life, so Tony doesn’t want to put her in any kind of danger.

Since Anna doesn’t understand the situation, she’ll think two can play at that game. Days spoilers state that Anna will put a marriage scheme of her own in motion. She’ll want to tie the knot with Roman Brady (Josh Taylor) – or at least make some wedding plans to spark Tony’s jealousy. Anna will be convinced she can reel Tony back in with a little effort, so she’ll give it her best shot.

Over with Marlena Evans (Deidre Hall), she’ll take a moment to catch up with Tony. They’ll reunite after many years apart, so there’ll be a lot to cover! However, Tony will mainly be worried about his relationship with Anna. Marlena will offer some good advice about how to get his romance back on track.

Tony will end up demanding a divorce again next week, so he may not let Kristen push him around anymore. “Nicole” is set to be exposed as Kristen soon, which means Tony’s latest nightmare is almost over. He’ll be able to enjoy a reunion with his beloved Anna and focus on their future together.

Other Days of Our Lives spoilers say Xander will be on the hot seat. He’ll deal with plenty of questions from Hope Brady (Kristian Alfonso) and John Black (Drake Hogestyn). They’ll be trying to find out any hints that could help them catch Ted Laurent’s (Gilles Marini) killer.

Xander didn’t pull the trigger, but his involvement with “Nicole” aka Kristen will leave him in a tight spot. As a result, Xander will try to spin things in his favor and gain the upper hand. We’ll give you updates as other Days news comes in. Stay tuned to DOOL and don’t forget to check CDL often for the latest Days of Our Lives spoilers, updates and news.

Love our DiMera family. Wonderful day with my young sibling Chad & Billy. Always resonating when we share the life together. Cheeky men who love to stir. Days #NBC pic.twitter.com/zs8eNzjTO3