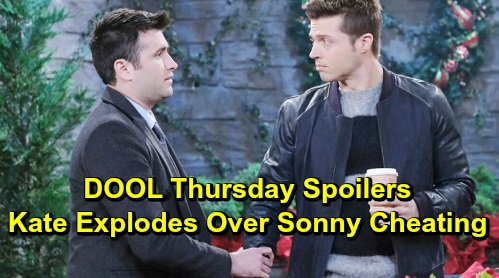 Days of Our Lives (DOOL) spoilers for Thursday, December 12, tease that Kate Roberts (Lauren Koslow) will face an infuriating shocker. DOOL fans know Kate’s firmly in Will Horton’s (Chandler Massey). She loves her grandson and has been doing everything she can to support him during his prison stint. That’s why Kate will explode when she realizes Sonny Kiriakis (Freddie Smith) has been kissing someone else!

Kate will find out about Sonny’s lip lock with Evan Frears (Brock Kelly), so she’ll promptly rip into Will’s husband. She’ll undoubtedly remind Sonny of his vows and insist Will never meant to hurt anyone. Will would do anything to change what happened that night and bring Adrienne Kiriakis (Judi Evans) from the dead. However, Sonny can’t get past Will’s actions – at least not yet. He may defend the kiss since Evan was the one that planted it anyway.

Of course, that won’t appease Kate, who’ll make her way over to Statesville to tattle on Sonny. During Kate’s next chat with Will, she may urge him to summon Sonny for a visit and fight for their marriage. Unfortunately, Will’s battling too much guilt to do that. He’ll end up pushing for a divorce next week, so it seems Kate’s bombshell will be a different turning point than she’s hoping.

Until then, Will’s going to spot another familiar Salemite – one that’ll bring him a great deal of pain to see. Justin Kiriakis (Wally Kurth) agreed to be Ben Weston’s (Robert Scott Wilson) attorney, so it looks like he’ll visit Ben to go over his case on Thursday. That’ll give Justin a chance to cross paths with Will – perhaps near the visiting area since Will and Kate will spend some time together there.

Naturally, Days spoilers say this will be a difficult meeting on both sides. It’ll be hard for Will to face Justin knowing he took Adrienne from him, and it’ll be tough for Justin to look in the eyes of Adrienne’s killer. The good news is a twist will likely reveal Will is innocent down the road. The bad news is Will will have to suffer in the meantime.

Other Days of Our Lives spoilers say Nicole Walker (Arianne Zucker) will hear about Mackenzie “Mickey” Horton’s cancer diagnosis. She’ll try to comfort Eric Brady (Greg Vaughan), but he may pull away due to the secret Nicole kept. It’s not fair to put all the blame Nicole when Sarah Horton (Linsey Godfrey) is Mickey’s lying mother, but Eric’s focus will be on Mickey right now anyway.

Sarah and Eric will ultimately decide Mickey needs to see a specialist in Boston. They’ll hear good things about a doctor there who could save Mickey with the best treatment possible. Days of Our Lives spoilers say Eric and Sarah make travel plans, so let’s hope this trip works out for Mickey! We’ll give you updates as other Days details emerge. Stay tuned to DOOL and don’t forget to check CDL often for the latest Days of Our Lives spoilers, updates and news.