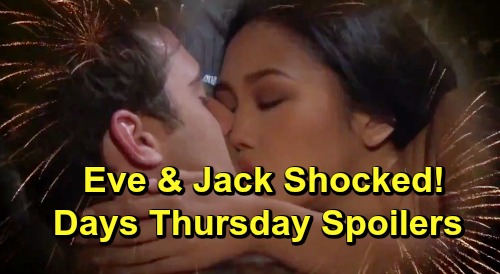 Days of Our Lives (DOOL) spoilers for Thursday, July 4, tease that the Brady-Horton barbecue will get underway. This was Rex Brady’s (Kyle Lowder) last-minute idea, but he managed to rustle up enough burgers and hot dogs with Sarah Brady’s (Linsey Godfrey) help. The timing isn’t great now that they know about Claire Brady’s (Olivia Rose Keegan) difficult situation, but she wouldn’t want them to trade their Independence Day bash for a pity party.

The world will keep turning while Claire gets the help she needs, so the rest of Salem might as well have some fun. Days of Our Lives spoilers say Rex will challenge Eric Brady (Greg Vaughan) to a cookoff in Thursday’s episode. DOOL fans can expect these brothers to go head to head with their signature dishes, so we’ll see who’s the real grill master.

Over with Carrie Brady (Christie Clark), she’ll have a confession to make. Carrie will open up to Roman Brady (Josh Taylor) about her separation from Austin Reed (Austin Peck) and perhaps admit her Rafe Hernandez (Galen Gering) hookup, too. She’ll want to get a few things off her chest, so Days spoilers state that Roman will listen and offer some advice.

Meanwhile, Eli Grant (Lamon Archey) will have a big surprise in store for Lani Price (Sal Stowers). They recently reconnected and figured out how to handle their grief over losing their baby boy. Now that they’re back on track, Eli knows he never wants to let Lani go. Days of Our Lives spoilers say Eli will pull out an engagement ring on Thursday and ask Lani to marry him.

Thankfully, Lani will get on board with that plan. These two will start planning their nuptials soon enough, but they’ll just savor the moment for now. Across town, Jack Deveraux (Matthew Ashford) and Eve Deveraux (Kassie DePaiva) will get some shocking news. They’ll find out Melinda Trask (Laura Kai Chen) pulled some strings with the senator to get Haley Chen (Thia Megia) out of her jam.

Jack and Eve won’t be happy about that, but JJ Deveraux (Casey Moss) will defend Haley and take the opportunity to rub in this victory. He’ll be glad the nightmare Eve and Jack started is finally over for Haley. Her legal issues aren’t resolved yet, but at least she can stay in the country while she works toward that goal.

Later, Haley and JJ will relax as they take in the fireworks show. Several other Salemites will gather in the town square, outside the pub and in the park. It’ll be a fantastic way to cap off this exciting episode. We’ll give you updates as other Days details emerge. Stick with DOOL and don’t forget to check CDL often for the latest Days of Our Lives spoilers, updates and news.