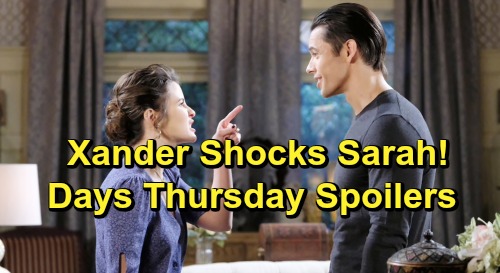 Days of Our Lives (DOOL) spoilers for Thursday, June 13, tease that “Nicole Walker” (Arianne Zucker) will have a pitch to make. She just showed up at the DiMera mansion to see Stefan DiMera (Brandon Barash), so he’ll be curious about what she wants to discuss. “Nicole” will likely cut right to the chase. She wants a job at DiMera Enterprises and is counting on Stefan to give her one.

Of course, DOOL fans know “Nicole” is really Kristen DiMera (Stacy Haiduk). She’s manipulating Stefan into letting her in the company, which could leave her poised for a takeover. For now, Kristen just has to get her foot in the door. She’ll convince Stefan to give “Nicole” a position running Basic Black, so she’ll be one step closer to one of her goals.

Over with Xander Cook (Paul Telfer), he’ll drop a bomb on Dr. Sarah Horton (Linsey Godfrey). Days of Our Lives spoilers say Xander will offer Dr. Wilhelm Rolf’s (William Utay) diary, but he’ll have to be sneaky about it. He won’t want Sarah to think he’s been sitting on it this whole time.

Xander may claim he heard about Will Horton’s (Chandler Massey) dilemma and did some digging. He’ll spin this in whatever way will make him look like a hero, but Sarah will be skeptical. Even so, this diary can help Will survive and that’s what matters. Days spoilers say Sarah and Dr. Rex Brady (Kyle Lowder) will work hard to turn the formula into a cure next week.

Meanwhile, Kate Roberts (Lauren Koslow) and Dr. Marlena Evans (Deidre Hall) will lean on each other for support. They’ll fret about Will’s declining condition, but they’ll gain strength as they bond over the looming loss. Thankfully, Will’s going to be just fine. There’ll be some scary moments along the way, but Will’s recovery is coming up soon.

Other Days of Our Lives spoilers state that Ted Laurent (Gilles Marini) will have a brilliant idea. Well, at least he’ll think it’s brilliant! In reality, it’ll turn out to be a pretty terrible one. After Hope Brady (Kristian Alfonso) turns down a gift from Ted, he’ll step up his efforts to win her over. Ted will think he can make this romance happen with a heroic move.

Will Ted plan to tell “Nicole” that Holly Jonas (Harlow and Scarlett Mallory) is still alive? He may think he can win Hope’s heart if he reunites Nicole and her daughter. Since “Nicole” is actually Kristen and this whole plot is her doing, that could be a huge mistake. Ted will definitely make a confession to “Nicole” on Friday, June 14, so stay tuned to see all the drama ahead.

It sounds like some great scenes are coming up. We’ll give you updates as other Days news emerges. Stick with DOOL and don’t forget to check CDL often for the latest Days of Our Lives spoilers, updates and news.