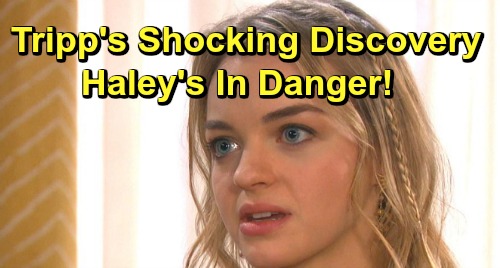 Days of Our Lives (DOOL) spoilers tease that Claire Brady (Olivia Rose Keegan) will practically be on the verge of a breakdown. She’s clearly coming unhinged, which isn’t good news for Tripp Dalton (Lucas Adams) and Haley Chen (Thia Megia). Claire already can’t stand the fact that they’re married, but she’s about to face a bomb that leaves her in a disturbing state of mind.

DOOL fans know Claire wants her boyfriend all to herself. Instead, she has to share Tripp with his new wife, Haley. However, Claire will focus on the temporary nature of the situation. She’ll believe Haley and Tripp can sell the story to immigration, get Haley her green card and move on. Claire will assume this is a quick process, so she’s in for a rude awakening when she learns it could take years.

Tripp and Haley can’t just divorce immediately. Days spoilers say they’ll have to stick to the plan and pretend they have a happy, loving marriage. Once Claire realizes they won’t be splitting up anytime soon, she’ll hit the roof. Claire will definitely struggle to get a grip on her intense, wild emotions.

Days of Our Lives spoilers state that Claire will flash those crazy eyes when she finds Haley and Tripp’s wedding picture. It appears she’ll nearly burn it with the lighter, but she’ll ultimately opt to just rip it instead. Later, Tripp will stumble across the torn photo. He’ll undoubtedly suspect Claire isn’t handling this sham marriage as well as he thought.

Claire might cover up her behavior by suggesting it was a heat of the moment thing. She may respond sweetly in hopes of keeping her relationship intact. Tripp might buy it or he could grow concerned about what this will do to Claire. He may even think it’d be kinder to just break up. On the other hand, Tripp could respond angrily since he’s told Claire time and time again that he doesn’t love Haley.

Either way, Days of Our Lives spoilers say Claire will realize she needs to do something drastic. She’ll refuse to let Haley steal Tripp’s heart and destroy her shot at happiness. How far will Claire go to push Haley out of the picture? Is another violent act looming?

It looks like some Claire chaos is coming up on the NBC soap. We’ll give you updates as other Days details emerge. Stay tuned to DOOL and don’t forget to check CDL often for the latest Days of Our Lives spoilers, updates and news.