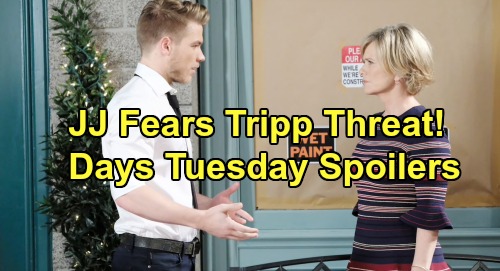 Days of Our Lives (DOOL) spoilers for Tuesday, August 20, tease that Marlena Evans (Deidre Hall) will have “Nicole DiMera” (Arianne Zucker) on her mind. She’ll have a nagging feeling that something’s off, so she’ll express her concerns to John Black (Drake Hogestyn). Marlena will talk about “Nicole’s” bizarre behavior during their recent interactions. She’ll be confused and unsure of how to help this grieving, out-of-control mother.

Of course, the problem is “Nicole” isn’t really grieving – and she isn’t really Nicole. DOOL fans know Holly Jonas (Harlow and Scarlett Mallory) is alive, and that news will finally be out in the open next week. Kristen DiMera’s (Stacy Haiduk) exposure is coming up soon, but she’ll struggle to keep her plan intact for now. Sonny Kiriakis (Freddie Smith) just showed up at the mansion, which means Kristen will have to think fast.

Stefan DiMera (Brandon Barash) is already down in the secret room, but Kristen still has to get unconscious Gabi DiMera (Camila Banus) down there. She obviously doesn’t want Sonny discovering her plan in progress, so it sounds like she’ll have to put her mask back on and get rid of him. Sonny should think “Nicole’s” acting weird, but that’s nothing new for her lately!

In the meantime, Days spoilers say Will Horton (Chandler Massey) will explain his suspicions to Brady Black (Eric Martsolf). He’ll insist that Xander Cook (Paul Telfer) has been on Kristen’s payroll, so she might be still alive. Brady can’t stop thinking about Kristen, so he may get past any doubts he has about her survival and assume he’s sensing her presence in some way.

Over with Tripp Dalton (Lucas Adams), Days of Our Lives spoilers say he’ll open up to Kayla Johnson (Mary Beth Evans) about his growing feelings for Haley Chen (Thia Megia). Tripp will admit he’s falling hard, but he’ll want to respect boundaries. Haley’s in love with JJ Deveraux (Casey Moss), so Tripp may not think he’s got a shot anyway.

As for JJ, he’ll sense that trouble could be brewing. Days of Our Lives spoilers say JJ will want to move out of the loft with Haley. Part of him may view Tripp as a threat, but this could be about Claire Brady (Olivia Rose Keegan) as well. JJ might argue that there are too many memories of crazy Claire around. Perhaps some distance would be helpful as Haley copes with her PTSD symptoms.

However, Tripp’s leaving town next week, August 26-30, which means JJ and Haley may stay at the loft after all. That won’t erase the Claire reminders, but at least they’ll have the place to themselves. Haley should be able to move past her trauma in time.

It looks like another great episode’s on the way. We’ll give you updates as other Days news emerges. Stick with DOOL and don’t forget to check CDL often for the latest Days of Our Lives spoilers, updates and news.