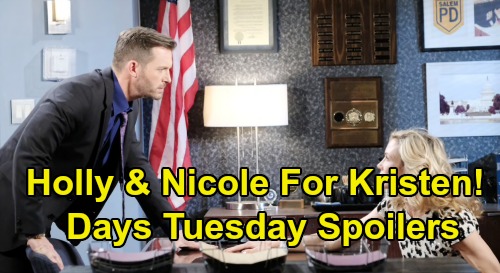 Days of Our Lives (DOOL) spoilers for Tuesday, August 27, tease that Gabi DiMera (Camila Banus) and Stefan DiMera (Brandon Barash) will grow even closer. It was bound to happen since they’re trapped down in the DiMera tunnels! Their time in captivity is forcing Gabi and Stefan to face their true feelings, so they’ll take a big step forward soon enough.

Gabi will finally admit she actually fell in love with Stefan. DOOL fans know that was never Gabi’s plan, but she just couldn’t fight it – and she still can’t now. Stefan will confess he feels the same way, so they’ll get their relationship back on track. It’ll remain a complicated one, but at least they’ll be able to accept what they want.

Other Days spoilers say Sonny Kiriakis (Freddie Smith) and Will Horton (Chandler Massey) will grow concerned. The longer Gabi stays out of touch, the more worries Will and Sonny will have. It’s not like Gabi to ignore their calls and texts. She wouldn’t just abandon Arianna Horton (Harper and Sydnee Udell) like that, so the guys will decide to take action.

Will and Sonny will head down to the Salem PD to report Gabi missing, but eavesdropping will send them in another direction. That’s because they’ll overhear Tony DiMera (Thaao Penghlis) admit the location of the hostages. Anna DiMera (Leann Hunley) will push Tony to use this information to advantage. She’ll hope confessing where Stefan and Gabi are could be used as leverage in a deal.

However, Sonny and Will may blow that plan by saving the captives themselves! Whatever the case, they’ll indeed become Stefan and Gabi’s rescuers before long. Over with Kristen DiMera (Stacy Haiduk), she’ll offer to tell Brady Black (Eric Martsolf) and the cops everything. Kristen knows Holly Jonas (Harlow and Scarlett Mallory) is alive and with Nicole Walker (Arianne Zucker) – and she has the power to bring them home.

The catch is Kristen will only give up Nicole and Holly’s location if she’s completely cleared of all charges. She has to walk out of the station as a free woman or there’s no deal. Meanwhile, Days of Our Lives spoilers say Xander Cook (Paul Telfer) will stand by his claims. He’ll assure Maggie Kiriakis (Suzanne Rogers), Sarah Horton (Linsey Godfrey) and Eric Brady (Greg Vaughan) that he’s telling the truth about Holly’s survival.

After Xander explains the whole story, Days of Our Lives spoilers say Eric will make a beeline to the Salem PD. He’ll be ready to confront Kristen about what she’s done, so that faceoff’s coming up later this week. We’ll give you updates as other Days news emerges. Stick with DOOL and don’t forget to check CDL often for the latest Days of Our Lives spoilers, updates and news.