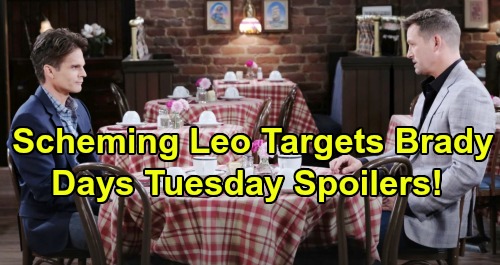 Days of Our Lives (DOOL) spoilers for Tuesday, March 19, tease that Eric Brady (Greg Vaughan) will make a vow to God and hope it saves his mom. Dr. Marlena Evans (Deidre Hall) has been caught in a battle for her soul, but she’s determined to fight her way back. Of course, Eric doesn’t know about the war that’s been waged. He just knows he wants Marlena to survive, and he’ll do anything to make it happen.

Eric will promise to steer clear of Sarah Horton (Linsey Godfrey) if Marlena pulls through. Since Marlena’s already returning to her body, Eric’s vow won’t really affect the outcome here. However, he’ll undoubtedly try to keep his promise once Marlena’s alive and well.

Days of Our Lives spoilers say Marlena’s heart will start beating again, so John Black (Drake Hogestyn) will be thrilled over this miracle. Even Dr. Kayla Johnson (Mary Beth Evans) thought Marlena was dead and gone forever, but Marlena’s too much of a fighter. She couldn’t leave her family and friends when they still need her.

Other Days spoilers state that Leo Starke (Greg Rikaart) will do some scheming. He’ll try to pry info out of Brady Black (Eric Martsolf) so he can pass it along to Stefan DiMera (Tyler Christopher). Naturally, Brady will keep his guard up. He’ll even outsmart Leo by the end of the week, so that’s sure to bring some serious conflict.

Over with Diana Cooper (Judith Chapman), she’ll realize she might’ve made a mistake. DOOL fans know Diana tried to kill Marlena with penicillin-laced cookies. When that didn’t work, Diana tried again by poisoning Marlena’s IV drip. It looks like Diana left some proof behind, so she’ll fear the jig will be up if she can’t cover her tracks.

Finally, Days of Our Lives spoilers say Ciara Brady (Victoria Konefal) will make a powerful plea. She’ll push Ben Weston (Robert Scott Wilson) to accept that they belong together and take her back. Ben won’t be able to resist a steamy kiss with Ciara, but it’ll be interrupted by the sound of gunshots. A bullet will speed in a window and nearly hit Ciara soon enough.

Ciara will face another round of danger, so Ben will once again worry about the world he’d force her to live in. DOOL viewers won’t want to miss the exciting scenes ahead. We’ll give you updates as other Days news comes in. Stay tuned to the NBC soap and don’t forget to check CDL often for the latest Days of Our Lives spoilers, updates and news.