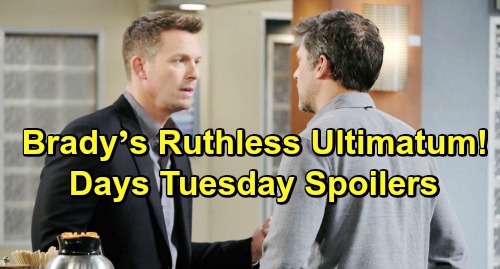 Days of Our Lives (DOOL) spoilers for Tuesday, March 26, tease that Leo Starke (Greg Rikaart) will face another tough blow when he returns to the Kiriakis mansion. He just learned that Diana Cooper (Judith Chapman) lied about his paternity, so he’s already in a dark place. It turns out Sonny Kiriakis (Freddie Smith) will make Leo’s day even worse.

Sonny will hand over annulment papers and push Leo to sign them immediately. Leo dropped the charges against Sonny and Will Horton (Chandler Massey), but he still hates to give up all the finer things that come with being a Kiriakis. Days spoilers say Leo will resort to one last round of scheming. He’ll try to pry some money out of Sonny before they part ways, but Will’s announcement will shut all this down.

Once Will finds out Leo isn’t John Black’s (Drake Hogestyn) son, he’ll rush over to give Sonny the news. Sonny will realize there’s no reason to show any kind of compassion, which means Leo will be out of luck. However, Leo will get a little revenge before he gives up and moves on. He’ll curse Will with an evil eye, so Will’s the next Salemite who’ll be hit with terrible misfortune. 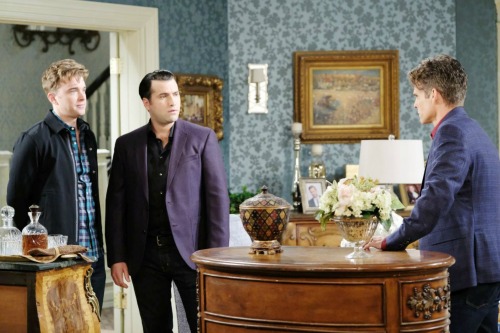 Other Days of Our Lives spoilers say Ben Weston (Robert Scott Wilson) will deal with a medical issue. He’ll have to head to the hospital, but Ciara Brady (Victoria Konefal) will be there to dote on him. DOOL viewers will even see a sponge bath before Ben’s hospital stint concludes, so Ciara will bring some heat for “Cin” fans.

Over with Brady Black (Eric Martsolf), he’ll spot another close moment between Eric Brady (Greg Vaughan) and Sarah Horton (Linsey Godfrey). Brady will once again lash out, but Sarah will insist nothing’s going on. She’ll hope Brady will just let this go, but he’ll secretly give Eric an ultimatum instead.

Days of Our Lives spoilers say Brady will back Eric into a difficult corner. He’ll contend that Eric can either help him get Chloe Lane (Nadia Bjorlin) away from Stefan DiMera (Brandon Barash) or he’ll tell Rex Brady (Kyle Lowder) about Eric’s kiss with Sarah. Sarah will hit the roof when she finds out later this week, so stay tuned for her fierce outburst.

It sounds like some exciting scenes are coming up. We’ll give you updates as other Days details emerge. Stick with DOOL and don’t forget to check CDL often for the latest Days of Our Lives spoilers, updates and news.