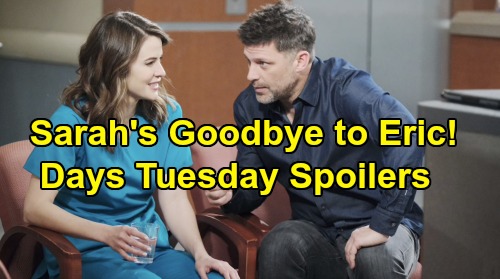 Days of Our Lives (DOOL) spoilers for Tuesday, October 15, tease that the news of Kristen DiMera’s (Stacy Haiduk) living arrangements will spread. DOOL fans know Brady Black (Eric Martsolf) encouraged Kristen to move in the Kiriakis mansion, so she’s naturally over the moon. Victor Kiriakis (John Aniston), on the other hand, was furious and the rest of Brady’s loved ones won’t be thrilled either!

On Tuesday, John Black (Drake Hogestyn) and Marlena Evans (Deidre Hall) will learn Kristen’s living under the same roof as Brady. They’ll immediately worry Kristen will use this arrangement as a way to pull Brady closer. Days spoilers say Marlena and John will fret about Brady’s willpower and fear this could be a massive mistake.

Across town, Nicole Walker (Arianne Zucker) will be baffled by Dr. Wilhelm Rolf’s (William Utay) recent arrival. She’ll wonder what business Dr. Rolf would have with Eric Brady (Greg Vaughan), so Dr. Rolf will explain that he’s got some information for him. At Nicole’s urging, Dr. Rolf will leave the envelope for Eric and take off.

Of course, that’s a problem since Xander Cook (Paul Telfer) has changed his mind. Days of Our Lives spoilers say Xander will keep trying to track down Dr. Rolf. He’ll eventually find the eccentric doc in the square and demand the envelope back. After Dr. Rolf reveals that he left it with Nicole, Xander will rush over in hopes of getting it back.

Over with Nicole, her curiosity will be too much to bear. Days of Our Lives spoilers say Nicole will open the envelope and realize Sarah Horton (Linsey Godfey) is indeed pregnant. That’ll leave Xander to plead his case and convince a reeling Nicole to keep quiet.

Until then, an emotional Sarah will tell Eric goodbye. She’ll reveal that she’s leaving Salem, but he may urge her to stick around. Eric won’t want to be the reason Sarah walks away from her family, friends and a job she loves. However, Eric should understand that Sarah wants a fresh start away from what might’ve been. He may ultimately wish Sarah the best as she begins a new chapter.

Days of Our Lives spoilers say Maggie Kiriakis (Suzanne Rogers) will beg Sarah to stay later this week, so perhaps her mom’s tearful plea will be what keeps her around. In the meantime, a frustrated Kate Roberts (Lauren Koslow) will have updates for Victor. She’ll mention that Mr. Shin (Michael Hagawari) wants Tony DiMera (Thaao Penghlis) to serve as DiMera’s new CEO and voice her displeasure.

Kate will certainly complain about this setback, but Days viewers know you can’t keep her down for long! It’ll be interesting to see what Kate cooks up next. We’ll keep you posted as other details emerge. Stay tuned to DOOL and don’t forget to check CDL often for the latest Days of Our Lives spoilers, updates and news.