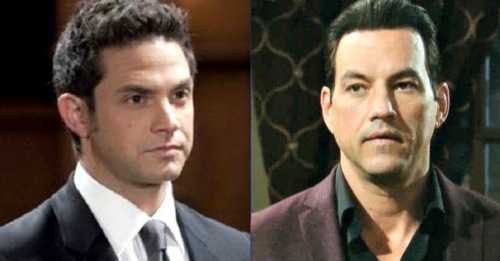 Days of Our Lives (DOOL) spoilers reveal that a temporary casting change has become permanent. When Tyler Christopher suddenly stepped away from Days for personal reasons, the show needed a fast Stefan DiMera recast. Luckily, Brandon Barash (ex-Johnny Zacchara on General Hospital) was available and quickly took the job.

This was supposed to be a temporary thing at first – at least that’s what DOOL spoilers said at the time. However, the show ultimately decided to stick with Barash. It’s possible Christopher couldn’t or didn’t want to resume the role. It’s also possible Days just liked Barash’s portrayal better or he came with a cheaper price tag.

Whatever the case, Christopher is out for good and Barash is at DOOL to stay. Days of Our Lives spoilers say this will provide an interesting opportunity for the NBC soap. Stefan’s actions haven’t made him the most well-liked character among soap fans. He’s desperately in need of a clean slate.

Plenty of viewers loved Christopher’s portrayal of Nikolas Cassadine over on General Hospital. There was great excitement when Christopher finally joined the cast of Days. Unfortunately, his character left a bit to be desired. This “villain” fell flat from the very beginning.

Stefan doesn’t have enough guts to be an evil DiMera – as evidenced by the fact that he simply let Gabi Hernandez (Camila Banus) walk free. On the other hand, Stefan isn’t particularly sympathetic either.

He raped mentally ill Abigail Deveraux (Kate Mansi) and fell in love “Gabby,” an alter who didn’t really exist. That whole storyline didn’t do him any favors in the likability department.

Now that Barash has taken on the role, perhaps Days will use the fresh face to their advantage. Even though this will still be Stefan, changing the character will be easy with someone new in the role.

Barash will put his own spin on things anyway, so it’s the perfect time to reboot Stefan. The show can either take him in a more sinister direction or fully commit to Stefan’s softer side.

Either way, DOOL seems to be loving what they’re seeing on set. Days of Our Lives spoilers say some exciting DiMera drama’s ahead! As we get closer to Barash’s first airdate, we’ll give you updates on any Stefan-related news. Stay tuned to the NBC soap and don’t forget to check CDL often for the latest Days of Our Lives spoilers, updates and news.

The new year starts with a shock: Jack is back, but he doesn’t remember anyone in Salem. Watch #DAYS, weekdays on NBC. pic.twitter.com/EcXbFQ4V8R