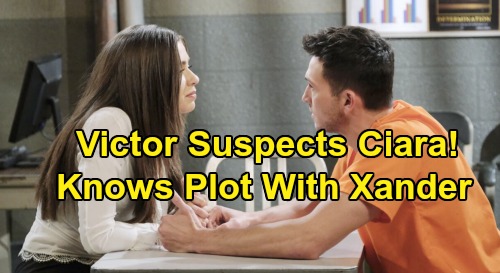 Days of Our Lives (DOOL) spoilers tease that Victor Kiriakis (John Aniston) will soon find himself getting suspicious of his granddaughter Ciara Brady (Victoria Konefal). As DOOL viewers know, Ciara is under the belief that Victor was behind Jordan Ridgeway’s (Chrishell Stause) murder. Specifically, she believes that Victor ordered Xander Kiriakis (Paul Telfer) to murder Jordan, then stage the scene so that it looked like Ben Weston (Robert Scott Wilson) committed the crime.

Well, for DOOL viewers the whole thing is a real mystery. It’s clear that Ben didn’t kill Jordan, since viewers saw him find her body and emotionally fall apart. But it’s currently unclear who killed her. Victor and Xander have talked on-screen about their coverup and how they were responsible for an innocent man being convicted, and Xander even wrote out a confession to some crime that he later burned, but could they have been responsible for another innocent man being convicted?

We can’t forget that Will Horton (Chandler Massey) also sits in prison…for the wrongful death of Adrienne Kiriakis (Judi Evans). Viewers aren’t privy yet to exactly what happened to Adrienne, except that she died from injuries sustained in an accident that was deemed to be Will’s fault. But it’s always possible that Victor and Xander somehow conspired to get Will convicted for some reason.

At any rate, things just aren’t clear about what Xander and Victor actually did, and whom they did it to. Still, DOOL spoilers say that Victor will soon get suspicious of Ciara. As DOOL viewers know, Ciara’s been climbing the ranks of the young executive program at Titan, and she’s been the apple of her grandfather’s eye. She’s been playing the part of a loyal employee and granddaughter, but it looks like something will happen soon to make Victor wary of her.

Days of Our Lives spoilers also say that Xander will grow increasingly concerned about Ciara. He’s found her snooping around his office and just generally gets a strange vibe from her, so maybe he’ll tip Victor off that something is awry with Ciara. Or, Victor could even have Ciara followed – after all, she spends a lot of time visiting with Ben at the prison, which is something that might give Victor pause, since Ciara has claimed to be through with Ben.

It should be interesting to watch Ciara and Victor interact going forward, with each suspecting the other and trying to play each other. It’s actually pretty reminiscent of what happened back in the 80s with Bo Brady (Peter Reckell) and Victor, back when Bo was pretending to be loyal to Victor in order to get dirt on him and bring him down.

Do you think that Ciara will be successful in her plot to find out what Victor and Xander did? Stay tuned to DOOL and don’t forget to check CDL often for the latest Days of Our Lives spoilers, updates, and news.