Days of Our Lives Spoilers: Vivian Reappears With Dr. Rolf – Reunites With Son Stefan But Trouble With Daughter-in-Law Gabi 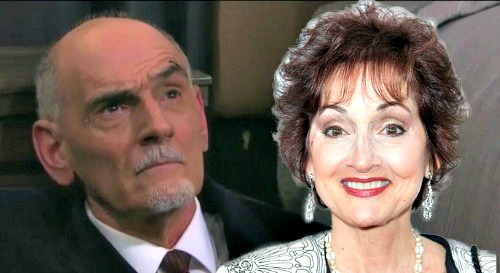 Days of Our Lives (DOOL) spoilers tease that viewers are in for a big return when Vivian Alamain (Robin Strasser) resurfaces on the Salem scene. As DOOL viewers know, the role played by Louise Sorel has been recast with OLTL vet Robin Strasser, so we’re about to see a whole new Vivian, and it looks like she’ll be anxious to return to her beloved son, Stefan DiMera (Brandon Barash).

Exactly how and where Vivian will resurface remains to be seen, but it can’t be a coincidence that the character will be returning on the same day as Dr. Wilhelm Rolf (William Utay). DOOL viewers will remember that the last we saw Vivian, she had died at University Hospital after being shot in cold blood by Kate DiMera (Lauren Koslow). Kate managed to convince the cops that the shooting was an accident, but DOOL viewers know better.

At any rate, Vivian then turned up in a makeshift hospital bed in an undisclosed location and as she woke up, she recognized someone who viewers did not see. DOOL fans have long speculated that the person she saw was Dr. Rolf, which would make sense since someone had to bring Vivian back to life. And it looks like Dr. Rolf did just that with his mystery serum.

Of course, it remains to be seen exactly what condition Vivian will be in. Dr. Rolf’s patients have ranged from severely disabled – which was the case with EJ DiMera (last played by James Scott) – to perfectly normal, like Tony DiMera (Thaao Penghlis). So far, all indications are that Vivian will be doing well both mentally and physically, as she’ll soon have a big reunion with her son Stefan.

DOOL viewers will remember that the last time we saw the close mother-son dynamic of Vivian and Stefan together, they were each portrayed by different people. Of course, Vivian was played by Louis Sorel, and Stefan was portrayed by Tyler Christopher. It should be interesting to see the new dynamic between Robin Strasser and Brandon Barash.

After so much lost time together, it seems that Vivian will have something to say about how Stefan has been living his life. According to DOOL spoilers, Vivian won’t be exactly thrilled to find her son married to Gabi DiMera (Camila Banus). Vivian was always quite protective of her son, and it doesn’t look like her time away will have changed that. She’ll probably have some words for her son about his new marriage, especially when she finds out how they got together.

It will be interesting to watch Vivian come back and reclaim her position in her son’s life, especially now that Gabi has cemented her place as Stefan’s wife. We should see some real tension there going forward, as Vivian and Gabi each strive to be the #1 woman in Stefan’s life!

Are you looking forward to Vivian’s return? Stay tuned to DOOL and don’t forget to check CDL often for the latest Days of Our Lives spoilers, updates, and news.