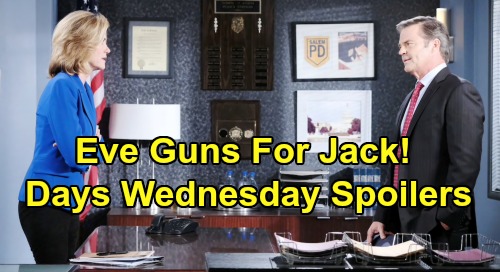 Days of Our Lives (DOOL) spoilers for Wednesday, August 14, tease that Jack Deveraux (Matthew Ashford) will read an article he disagrees with. Naturally, Jack himself will be the subject of this article, and it seems Jennifer Horton (Melissa Reeves) will be the journalist behind it. Jack won’t be happy about how he was portrayed in this news story, so he’ll confront Jenn and wonder what she thinks she’s doing.

Of course, Jennifer may reply that she’s just doing her job! She certainly still feels connected to Jack in some ways, but he hasn’t been the same man since he came to town. Although Jennifer approves of Jack’s decision to end things with Eve Deveraux (Kassie DePaiva), that doesn’t mean he gets a pass. Jack will have to live with the consequences of his decisions – and that means dealing with a little bad press.

Adrienne Kiriakis (Judi Evans) will pop up in Wednesday’s DOOL episode to defend Jennifer. She’ll do her best to help Jack understand and hopefully promote from peace between these exes. With any luck, maybe they won’t be exes for long! Jack doesn’t have access to the serum, but we have no doubt that the power of Jennifer’s love can bring his memories back eventually.

Over with Eve, she’ll turn to Justin Kiriakis (Wally Kurth) for help. Days of Our Lives spoilers say Eve will prep for a legal battle against Jack. She may want to file a lawsuit for wrongful termination – although Jack had every right to fire her. This could also be about maximizing what Eve gets in the divorce.

Regardless, Eve will want to make sure someone has her back in court. She’ll hope it’ll be Justin, but that may take some convincing! Next, Days spoilers say Tripp Dalton (Lucas Adams) will struggle with matters of the heart. He’ll realize his feelings for Haley Chen (Thia Megia) are more than friendly, so he won’t know what to do with them.

Thankfully, Kayla Johnson (Mary Beth Evans) is always willing to lend an ear. She’ll let Tripp open up to her on Wednesday, so he should appreciate his stepmom’s continued support. Kayla will likely offer some good advice and help Tripp figure out his next move.

As for Haley, Days of Our Lives spoilers say she’ll have a medical crisis thanks to a tumble at the loft. Haley will go flying down the stairs and hit her head, but it appears she’ll mostly just be shaken up. Even so, JJ Deveraux (Casey Moss) will worry about Haley’s behavior lately. He’ll sense that she’s out of sorts and unwilling to share her issues.

It sounds like another great episode’s coming up. We’ll give you updates as other Days details emerge. Stay tuned to DOOL and don’t forget to check CDL often for the latest Days of Our Lives spoilers, updates and news.