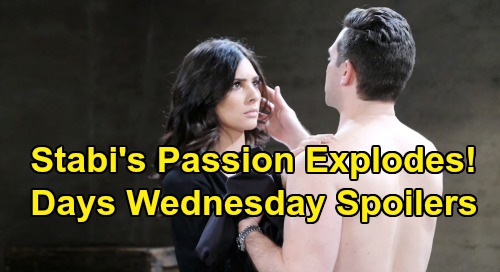 Days of Our Lives (DOOL) spoilers for Wednesday, August 21, tease that Gabi DiMera (Camila Banus) and Stefan DiMera’s (Brandon Barash) hostage situation will take a steamy turn. They’re trapped down in the DiMera tunnels thanks to Kristen DiMera (Stacy Haiduk), but they’ll make good use of their time. Stefan saved Gabi’s life because he loves her, so he’ll open up about his deep and lingering feelings.

Gabi will do the same, so it’s easy to see where these scenes are headed next! Days of Our Lives spoilers say Gabi and Stefan will surrender to their enduring love. They’ll strip down for a hot hookup, so even captivity can’t keep these two off each other. DOOL fans know the connection between them is intense and exhilarating, so they’ll both be happy to get their romance back on track.

Other Days spoilers state that Roman Brady (Josh Taylor) will keep his end of the bargain. Anna DiMera (Leann Hunley) roped Roman into a scheme to stir up some jealousy. She’s hoping Roman is the ticket to nudging Tony DiMera (Thaao Penghlis) into a divorce. Anna’s confident that she can win Tony back with Roman’s help, so Roman will do his part by offering an engagement ring.

It looks like that’ll indeed light a fire in Tony, who’ll once again demand a divorce from “Nicole DiMera” (Arianne Zucker). Of course, it’s actually Kristen DiMera (Stacy Haiduk) underneath the mask. She threatened Anna’s life if Tony didn’t cooperate, but he’ll want to try once more on Wednesday. Tony will be desperate to stop Roman and Anna’s marriage so he can be with his true love.

Although Tony may not be able to pull off his goal just yet, Days of Our Lives spoilers say a lip lock’s coming up. Tony will kiss Anna like he means it and perhaps urge her to see Roman isn’t the man for her. They’ll debate the topic over the next couple episodes, so Anna and Tony will have a lot to sort out.

Finally, Susan Banks (Stacy Haiduk) should be rolling in any minute now. She’ll bring some humor to John Black (Drake Hogestyn) and Marlena Evans’ (Deidre Hall) pre-celebration, but their actual anniversary part will bring the drama later this week! We’ll give you updates as other Days news comes in. Stay tuned to DOOL and don’t forget to check CDL often for the latest Days of Our Lives spoilers, updates and news.