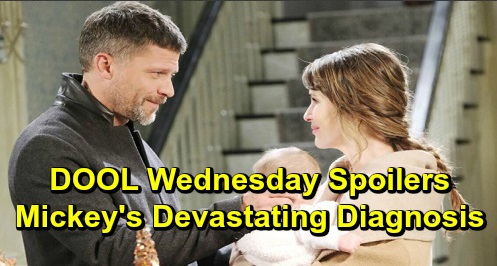 Days of Our Lives (DOOL) spoilers for Wednesday, December 11, tease that some crushing news is on the way for Sarah Horton (Linsey Godfrey) and Eric Brady (Greg Vaughan). DOOL fans know Eric grew concerned about Mackenzie “Mickey” Horton after she appeared lethargic and came down with a fever. Mickey was taken to the hospital to get checked out, but her test results will bring a devastating blow.

It turns out Mickey has a serious type of cancer called neuroblastoma. Kayla Brady (Mary Beth Evans) will likely be the one to deliver updates on Mickey’s condition. She doesn’t usually sugarcoat a diagnosis, so she should admit that Mickey’s life is at stake. Eric and Sarah will eventually learn about a specialist in Boston who could help Mickey, so they’ll make the decision to travel there this week.

Meanwhile, Days of Our Lives spoilers say Justin Kiriakis (Wally Kurth) will take a big step forward in a relationship with Kayla. He’ll officially move in with his love, so they’ll enjoy some happy moments together. Kayla and Justin know their romance has been a whirlwind considering Adrienne Kiriakis (Judi Evans) died earlier this year, but they’re confident in their couple status and where things are headed between them.

However, Justin will make time to hear Ciara Brady’s (Victoria Konefal) pitch on Wednesday. Days spoilers say Ciara will make a heartfelt plea and hope Justin will take Ben Weston’s (Robert Scott Wilson) case. It’ll take some work to convince Justin, but he’ll ultimately agree to meet with Ben and see what he can do.

Since Ben’s on death row, Ciara knows he needs all the help he can get! That’s especially true since Ben’s about to reveal his legal issues have gotten worse. In fact, Ben’s confession should be what prompts this sudden push from Ciara. She’ll realize time is of the essence, so she’ll do whatever it takes to ensure Ben’s freedom and keep him alive.

Over with “Princess Gina Von Amberg” aka Hope Brady (Kristian Alfonso), Days of Our Lives spoilers say she’ll decide not to eliminate Abigail DiMera (Kate Mansi). “Princess Gina” contemplated it up on the bistro balcony, but she’ll determine it’s not a wise choice in the end. “Princess Gina” will have to find another solution, which won’t be easy since Abigail’s closing in on the truth!

It sounds like some great scenes are coming up. We’ll keep you posted as other Days details emerge. Stay tuned to DOOL and don’t forget to check CDL often for the latest Days of Our Lives spoilers, updates and news.