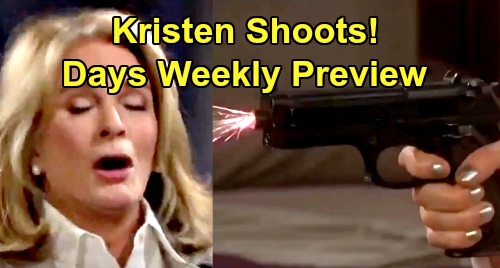 Days of Our Lives (DOOL) spoilers preview tease that we’re in for week of heart-stopping drama and plenty of action. The DOOL promo for the week of August 12th promises a new arrival to Salem, passion, eavesdropping, and some possible tragedies, so let’s jump right in.

First off, the promo reveals that Tony DiMera (Thaao Penghlis) and Anna DiMera (Leann Hunley) will come face to face. Anna is back in Salem, and according to DOOL spoilers, she’ll be on a mission to put what she believes are Tony’s ashes to rest in the DiMera mausoleum. But imagine her surprise when she actually bumps into Tony in the flesh in Horton Square!

Well, Anna’s not going to be amused to find out that Tony has been alive for a decade but hasn’t reached out to her at all, and she’s going to be even more peeved to learn that he’s married Nicole Walker (Arianne Zucker). The promo shows Anna slapping Tony twice, expressing her serious displeasure with him. According to DOOL spoilers, Anna will get her revenge soon enough, as she announces to Tony that she’s marrying Roman Brady (Josh Taylor)!

Next, the promo shows a major catfight between two ladies who have been at serious odds lately – Gabi DiMera (Camila Banus) and Nicole, who’s actually Kristen DiMera (Stacy Haiduk) in disguise. It looks like a pretty physical fight, and at one point Gabi is actually grabbing and tugging at Nicole’s face. It could get interesting if the “Nicole” mask winds up getting discombobulated!

The promo also alludes to some more passion coming up during the week of August 12th, as Eric Brady (Greg Vaughan) and Sarah Horton (Linsey Godfrey) are shown falling on the couch together, while Brady Black (Eric Martsolf) and “Nicole” flop down on a bed.

Speaking of beds, the promo addresses Ciara Brady’s (Victoria Konefal) and Ben Weston’s (Robert Scott Wilson) latest mission, which will be investigating Nicole. According to DOOL spoilers, the pair will look for evidence against her after Stefan DiMera (Brandon Barash) asks Ben to investigate who might be setting him up. That will lead “Cin” to Nicole’s hotel room.

But they’ll wind up in the room snooping around when Nicole/Kristen returns. They’ll panic and wind up hiding under the bed as Kristen walks around the room – we’ll see if they end up hearing or finding anything that might help Stefan beat the charges against him.

The new DOOL promo also addresses an upcoming meeting that will take place between Kristen and Marlena Evans (Deidre Hall). According to DOOL spoilers, Chloe Lane (Nadia Bjorlin) will ask Marlena to check on “Nicole,” since her behavior has been so erratic lately. Well, in the preview promo, it certainly looks like Kristen is firing a gun at Marlena, as Marlena drops to the ground!

And that’s not the only potential tragedy that we’ll see this coming week. It appears that Haley Chen (Thia Megia) will take a major tumble down the big spiral staircase at the loft. This doesn’t look good for Haley, and DOOL spoilers indicate that Haley will indeed have a medical emergency this week, so it looks like she’ll suffer some injuries from her fall.

That’s a lot for one week, so gear up for all the excitement! We’ll give you updates as DOOL news comes in. Stick with the NBC soap and don’t forget to check CDL often for the latest Days of Our Lives spoilers, updates, and news