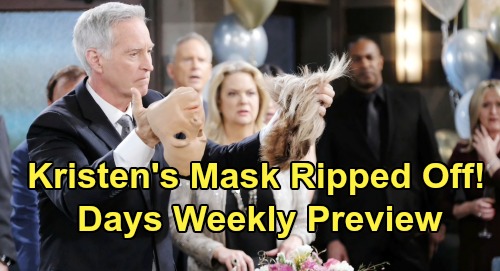 Days of Our Lives (DOOL) spoilers preview for the week of August 19-23 tease that a party’s about to go down in Salem. John Black (Drake Hogestyn) and Marlena Evans (Deidre Hall) are set to have an anniversary celebration – and this is sure to be one they’ll never forget! Brady Black (Eric Martsolf) will insist this has to be a drama-free bash, so “Nicole Walker” (Arianne Zucker) will undoubtedly offer reassurance.

Of course, it’ll be “Nicole” aka Kristen DiMera (Stacy Haiduk) who causes most of the chaos! Before we get to that, let’s talk about another wild incident. It looks like Kate Roberts (Lauren Koslow) may get the wrong idea when Susan Banks (Stacy Haiduk) shows up. Susan will just want to show her support for Marlena and John, but there may be a case of mistaken identity going on.

After all, Kristen has posed as Susan before. In fact, she’s done it more recently than many Salemites realize. Due to some other suspicions that arise this week, Kate will lash out at Susan. It appears Kate may try to rip Susan’s teeth out! She’ll likely assume Kristen is in disguise again and have to apologize to poor Susan when she’s wrong.

Later, the real disguise will be ripped off when John corners “Nicole.” After Xander Cook (Paul Telfer) confirms he’s worked for Kristen, the clues will come together. John will be the one to unmask “Nicole” and leave the crowd in total shock. However, Days of Our Lives spoilers say Kristen won’t go down without a fight. She’ll whip out a gun and point it at Marlena, so John will certainly fear for his wife.

Eric Brady (Greg Vaughan) will be floored by these shocking developments. He hates Kristen’s guts for many reasons, but this will really push him over the edge. Days spoilers state that Eric will reel since Nicole didn’t really come back from the dead. He’ll also have questions about Holly Jonas (Harlow and Scarlett Mallory), but the answers to those questions will take a little more time.

While all this party Days of Our Lives madness erupts, Stefan DiMera (Brandon Barash) and Gabi DiMera (Camila Banus) will be stuck in captivity. Fortunately, they’ll make the best of a bad situation. Gabi and Stefan will come clean about their true feelings for each before making love…repeatedly, we’d imagine!

It sounds like some exciting episodes are coming up this week. We’ll give you updates as other Days news emerges. Stay tuned to DOOL and don’t forget to check CDL often for the latest Days of Our Lives spoilers, updates and news.