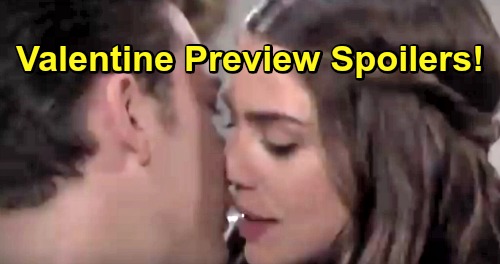 Days of Our Lives (DOOL) spoilers for the week of February 11-15 tease that some surprises will hit Salem. First, Chad DiMera (Billy Flynn) will do something drastic to secure the safe return of his daughter. He’ll offer a massive reward if someone can give Charlotte DiMera back to her family.

Jack Deveraux (Matthew Ashford) will also have family on his mind as he continues bonding with his son. He can’t remember his past, but he feels a connection to JJ Deveraux (Casey Moss) anyway. Days spoilers say JJ will ask Jack to keep Haley Chen’s (Thia Megia) undocumented status a secret. Eve Donovan (Kassie DePaiva), however, will think Jack should gain the upper hand with it.

Other Days of Our Lives spoilers say Gabi Hernandez (Camila Banus) will help Will Horton (Chandler Massey) and Sonny Kiriakis (Freddie Smith). She’ll take a break from being the resident bad girl to do a good deed. While Gabi distracts Leo Starke (Greg Rikaart), Will and Sonny will have a romantic Valentine’s Day celebration.

DOOL fans will also see a major fire this week. Jordan Ridgeway (Chrishell Hartley) will manage to get Ben arrested, but she’ll leave Ciara Brady (Victoria Konefal) trapped in the cabin anyway. Ben will save Ciara’s life with Chad’s assistance, but Jordan won’t be done yet. She’ll show up at the hospital to finish the job, so Ben may have to leap into action again!

Kate Roberts (Lauren Koslow) will face a medical crisis of her own thanks to Jordan. She’ll be drugged after she gets too close to the truth. Days of Our Lives spoilers say Rafe Hernandez (Galen Gering) will return to Salem and make a stunning discovery. He’ll find Kate unconscious and get her to a doctor ASAP. Later, Kate will flatline, so Rafe will anxiously await updates and hope for a miracle.

As for Hope Hernandez (Kristian Alfonso), she’ll soften toward Ben a bit. After Hope learns Jordan was behind Ciara’s abduction and not Ben, she’ll surely offer an apology. Hope still won’t like the idea of Ben and Ciara dating, but she’ll be grateful that he saved her daughter’s life. Ted Laurent (Gilles Marini) will also plant a kiss on Hope at some point, so she’ll be a busy gal.

Elsewhere, John Black (Drake Hogestyn) will demand some answers. He’ll ask Diana Cooper (Judith Chapman) if Leo is his son, but he may not get the truth. Diana recently talked to Leo about the death of his father, which Leo caused. They appeared to be discussing Leo’s biological dad unless Diana was lying.

Of course, it seems more likely that Diana will lie now! Telling John that Leo is his son could certainly keep him in her orbit. Days spoilers state that John will be troubled as he celebrates Valentine’s Day with Dr. Marlena Evans (Deidre Hall). Diana’s bogus revelation may be why.

It sounds like another great week’s ahead on the NBC soap. We’ll keep you posted as other Days news comes in. Stay tuned to DOOL and don’t forget to check CDL often for the latest Days of Our Lives spoilers, updates and news.