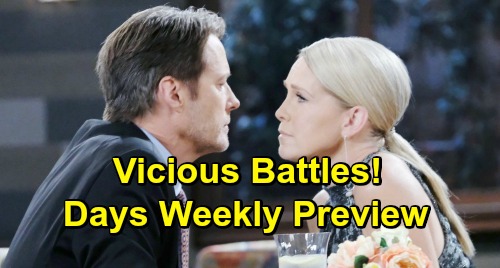 Days of Our Lives (DOOL) spoilers for the week of January 14-18 tease that we’ll see some determined Salemites. For starters, Chad DiMera (Billy Flynn) will keep inching toward his goal of winning back Abigail Deveraux (Kate Mansi). He’ll still have some work to do, but he’ll at least get to enjoy a kiss with his love.

Elsewhere, Will Horton (Chandler Massey) will focus on getting some leverage. He needs a way to get Leo Starke (Greg Rikaart) out of Sonny Kiriakis’ (Freddie Smith) life, but he’ll need some help to make it happen. That’s where John Black (Drake Hogestyn) will come in. Days of Our Lives spoilers say Will will ask for a big favor. He’ll hope John can track down Leo’s mom – his true Achilles’ heel.

Over with Melinda Trask (Laura Kai Chen), she’ll drop a bomb on Abe Carver (James Reynolds). Days spoilers say Melinda will announce that she’ll be running against him for mayor. Abe will have some competition, so he’s sure to be on edge. When Sheila Watkins (Tionne “T-Boz” Watkins) screws up on the job again, it’ll set Abe off even more than usual.

Of course, Melinda’s got a problem that needs to be dealt with. Her sister, Haley Chen (Thia Megia), is an undocumented immigrant and JJ Deveraux (Casey Moss) is sniffing around. Melinda will warn Haley to handle JJ and keep her secret under wraps – for both their sakes. Melinda mainly won’t want her political aspirations being derailed!

Days of Our Lives spoilers state that Haley will resist telling JJ the truth. Instead, she’ll open up to Dr. Marlena Evans (Deidre Hall) in a therapy session. It’ll be good for Haley to get this huge shocker off her chest. JJ will find out what’s up eventually, but he’ll just have to keep digging for now.

Other DOOL spoilers say Stefan DiMera (Tyler Christopher) will make a DiMera Enterprises comeback. He’ll infuriate Chad by vetoing his plan to give Gabi Hernandez (Camila Banus) back her company. Gabi herself won’t be too happy either. She’ll get into a heated argument with Stefan as they go to war over Gabi Chic.

Meanwhile, Rex Brady (Kyle Lowder) will return to town and ask Eric Brady (Greg Vaughan) for a place to stay. He’ll also want Eric to help him reunite with Sarah Horton (Linsey Godfrey), which is problematic since Eric’s already falling for her. Eric will reluctantly agree to pitch in, but things will go awry after Sarah pushes for honesty. She’ll want the name of the other person Rex cheated with.

Rex will confess that he hooked up with Sarah’s sister, Noelle, so she obviously won’t be OK with that. Sarah will tell Rex they’re through for good and march over to Eric’s apartment. She’ll insist she wants to Rex to feel the same kind of pain, so she’ll push for a hookup of her own with his brother but wind up with Xander Cook (Paul Telfer)!

Eric will also threaten to murder Xander this week, so there’s a lot going on in Salem. We’ll give you updates as other Days news comes in. Stick with DOOL and don’t forget to check CDL often for the latest Days of Our Lives spoilers, updates and news.