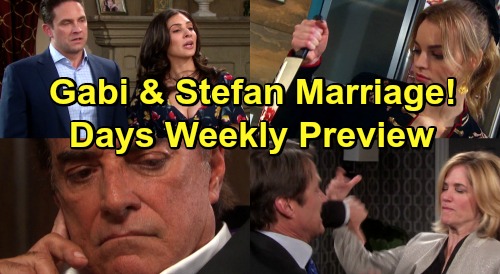 Days of Our Lives (DOOL) spoilers and preview video promo for the week of July 22-26 tease that it will be action-packed full of fights, relationship drama, a big return, and some sheer terror. The promo for the week of July 22, 2019 starts with some big drama when Susan Banks (Stacy Haiduk) comes face-to-face with Kristen DiMera (Stacy Haiduk) in the park.

It looks like it will be a wild scene as Susan whips out a gun and holds Kristen, who’s in her “Susan” costume, at gunpoint. Exactly how Kristen is going to get away remains to be seen, but it looks like she’ll manage to flee the scene unscathed and that she’ll eventually get her “Nicole” mask back, as she’s also shown in the promo posing as Nicole while talking to Brady Black (Eric Martsolf).

“Nicole” and Brady will have an interesting conversation that will include mention of both Tony DiMera (Thaao Penghlis) and Andre DiMera (Thaao Penghlis). According to Days of Our Lives spoilers, we’ll see Tony back on Friday, August 26, which is the same day that “Nicole” will seek out someone important from the past. Viewers will want to tune in to catch Tony’s re-emergence, as we haven’t seen the character since his presumed death a decade ago.

The new Days promo also addresses both a marriage and a pending divorce. Gabi Hernandez (Camila Banus) and Stefan DiMera (Brandon Barash) are shown together while Gabi asks someone to perform their wedding ceremony, so things certainly seems to be moving right along with their relationship. DOOL spoilers indicate that their marriage might be part of a strategy to deal with “Nicole” and will probably be Gabi’s bright idea.

Gabi is itching to move her relationship with Stefan along. After all, her master plan is to marry Stefan, then take him for everything he’s worth out of spite, since Stefan helped frame her for Andre’s murder last year. At any rate, it looks like their marriage is going to happen, and happen quickly!

While all this is going on, another couple will have a major blowout. Jack Deveraux (Matthew Ashford) and Eve Deveraux (Kassie DePaiva) will be at serious odds after Eve betrays Jack. According to Days of Our Lives spoilers, Jack will catch Eve after she deliberately withholds Dr. Wilhelm Rolf’s (William Utay) memory serum from him. She’ll pretend to support Jack’s efforts to regain his memories, but then she’ll swipe the real serum and inject Jack with a placebo!

Jack’s not going to be happy at all, and the preview video shows him angrily telling Eve that he’s going to divorce her before the two get into a physical altercation. It looks like a pretty bad scene. And speaking of physical altercations, Rex Brady (Kyle Lowder) and Xander will finally get into it over Sarah Horton (Linsey Godfrey). This one has been a long time coming.

The promo shows Rex telling Xander “I will end you” before shoving him forcefully and lunging in his direction, all while Sarah and Eric Brady (Greg Vaughan) look on. It’s doubtful that Rex and Xander will solve anything between them, but they might get some of their rage for each other out of their systems.

Finally, the new Days of Our Lives promo shows a gory scene, presumably of Haley Chen’s (Thia Megia) nightmare, or perhaps a hallucination, about Claire Brady (Olivia Rose Keegan). According to DOOL spoilers, Haley will have some difficulties adjusting after her horrifying experiences with Claire. After all, Claire did try to kill her and Tripp Dalton (Lucas Adams), and it looks like Haley will show some signs of post-traumatic stress disorder.

She’ll envision a vengeful Claire stabbing Tripp in the back and mortally wounding him, while she looks on helplessly. It will be a terrifying scene, but according to DOOL spoilers, Tripp and Haley will try to handle Haley’s disturbing nightmares and visions on their own, without getting Haley professional help or letting JJ Deveraux (Casey Moss) know what’s going on.

It certainly sounds like we’re in for an exciting week! Stay tuned to DOOL and don’t forget to check CDL often for the latest Days of Our Lives spoilers, updates, and news.