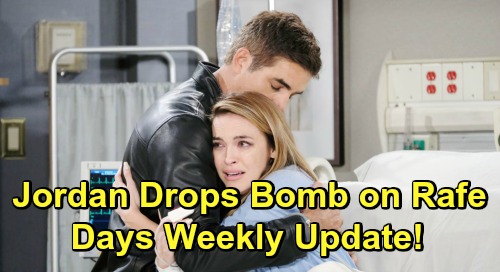 Days of Our Lives (DOOL) spoilers for the week of March 25-29 tease that some heated confrontations are coming up. First, Leo Starke (Greg Rikaart) will learn Diana Cooper (Judith Chapman) lied about his paternity. John Black (Drake Hogestyn) isn’t Leo’s father after all, so Leo will unleash his wrath. He’ll physically attack his mother, so John will have to hold him back.

Next, Sonny Kiriakis (Freddie Smith) will hand over divorce papers. Leo will reluctantly sign them and give up his cushy Kiriakis lifestyle, but Will Horton (Chandler Massey) will pay the price. Days spoilers say Leo will put a curse on Will before he goes. Sonny won’t think it’s legit until he makes a horrifying discovery later. He’ll find Will unconscious after a medical issue suddenly strikes.

While Will is rushed to the hospital, Brady Black (Eric Martsolf) will confront Chloe Lane (Nadia Bjorlin) about her romance with Stefan DiMera (Brandon Barash). Chloe will admit they’ve kissed and are toying with the idea of a relationship. Days spoilers state that Brady will disapprove, so he’ll pull Chloe into his own lip lock. She’ll feel the heat, but she’ll still lash out at Brady for his bad behavior.

Afterward, Brady will track down Eric Brady (Greg Vaughan), who’ll be sharing another warm moment with Sarah Horton (Linsey Godfrey). Brady will get irritated again, but Sarah will try to explain. She’ll assure Brady that Eric doesn’t return her feelings, but that’s not true and Brady will know it.

As a result, Brady will use Sarah and Eric’s secret to his advantage. He’ll tell Eric to convince Chloe to move out of the DiMera mansion or else Rex Brady (Kyle Lowder) will hear about that kiss. Brady will play up the Holly Jonas (Harlow and Scarlett Mallory) angle here. He’ll contend that it’s not safe for Holly to be around Stefan, so it’ll all factor into Eric’s response.

Eric will agree to help Brady, but Sarah will be outraged when she gets updates on this ultimatum. Meanwhile, Days of Our Lives spoilers say things will take a steamy turn between Stefan and Gabi Hernandez (Camila Banus). They’ll kiss during an upcoming fight, so DOOL viewers won’t want to miss it.

Finally, Jordan Ridgeway (Chrishell Hartley) will ask for Rafe Hernandez (Galen Gering). She’ll request a visit with her ex so she can drop a bomb on him. Days of Our Lives spoilers say it could turn Rafe’s world upside down! Days buzz says that a secret baby is going to be revealed. We’ll keep you posted as other news comes in. Stay tuned to DOOL and don’t forget to check CDL often for the latest Days of Our Lives spoilers, updates and news.