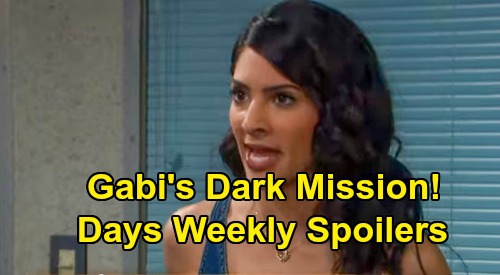 Days of Our Lives (DOOL) spoilers for the week of October 21-25 tease that we’ll see some tender moments. First, let’s talk about Brady Black (Eric Martsolf). As DOOL fans and all Brady’s loved ones expected, he’ll find himself growing closer and closer to Kristen DiMera (Stacy Haiduk).

A medical crisis will hit for Kristen, but it looks like it’ll be pretty minor. The experience will actually be a lucky break for Kristen. She’ll have Brady to lean on while she awaits answers, and they’ll even end up listening to the baby’s heartbeat for the first time. Naturally, that’ll suck Brady right in.

Days spoilers say Brady will open the paternity results this week as well, which should confirm Kristen’s claims. He’ll later support Kristen as she heads to Stefan DiMera’s (Brandon Barash) funeral. By the time it’s all said and done, Brady will land in Kristen’s bed! He’ll be forced to decide if he’s going to go all in on a “Bristen” family or stick to this co-parenting plan. It’s safe to assume it’ll be the former.

In the meantime, we’ll see two marriage proposals. Days of Our Lives spoilers say Justin Kiriakis (Wally Kurth) will pop the question to Adrienne Kiriakis (Judi Evans), so she should be thrilled. Over with Jack Deveraux (Matthew Ashford), he’ll have the same idea in mind. Jack will sneak back in the Horton house to get Jennifer Horton’s (Melissa Reeves) old engagement ring. He’ll get down on one knee and wonder if she’ll marry him once again.

Jennifer will gladly accept Jack’s proposal, so they’ll be on cloud nine. Unfortunately, Gabi DiMera (Camila Banus) will be anything but happy. Days of Our Lives spoilers say Gabi will bid Stefan DiMera (Brandon Barash) farewell as his funeral. After that, Gabi will focus on avenging Stefan’s death. She’ll do everything in her power to end Lani Price (Sal Stowers) and Eli Grant’s (Lamon Archey) bliss for good!

Across town, Jordan Ridgeway (Chrishell Hartley) will put a dangerous plot in motion. She’ll do the cooking for David Ridgeway’s birthday party, which will be a secret trap for Ciara Brady (Victoria Konefal). Ciara will indeed wind up feeling ill at this gathering, but it seems Jordan will lose control of her scheme. Rafe Hernandez (Galen Gering) will keel over – most likely after eating something meant for Ciara.

Finally, Hope Brady’s (Kristian Alfonso) transformation into Princess Gina will be complete. Dr. Wilhelm Rolf (William Utay) will seal the deal by handing over a tiara, so Hope will do some crazy things next week and beyond. We’ll give you updates as other Days news comes in. Stay tuned to DOOL and don’t forget to check CDL often for the latest Days of Our Lives spoilers, updates and news.