Days of Our Lives Spoilers: Where is Little Ari – Will Gabi’s Daughter Be SORAS’d After The Time Jump? 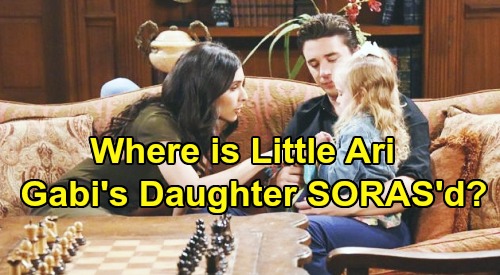 Days of Our Lives spoilers tease more little tykes might be aged up. Will Horton (Chandler Massey) and Gabi Hernandez DiMera’s (Camila Banus) daughter, Arianna Grace Horton (Harper Udell and Sydnee Udell) is one possibility. Little Ari hasn’t been seen in a few weeks on the soap. If she is SORASed, how much older will she be and does this mean she will get more screen time?

The adorable twin girls have been portraying Will and Gabi’s daughter since May 2013. The last time we saw Ari on our television screens, they were still playing the part. That’s a pretty long time to play the same child character on a soap. With young children, the actors usually change often. This makes these two pretty special!

Biggest Storyline Was When Mother Was Released From Jail

Days of Our Lives spoilers reveal the biggest storyline Ari has had is when her mother was released from prison. She felt Gabi abandoned her and made her voice known.

She wanted nothing to do with the Latina fashionista. It was a painful story that went on for a few weeks. It is part of the reason why Gabi wanted revenge on Stefan DiMera (Brandon Barash), the man she is currently married to.

With a time jump of one year coming in the near future, it is unclear if little Ari will be SORSASed or not. However, it appears that she might due to the simple fact that she has been mentioned, but not seen lately. Plus, a child can change a lot in a year.

Salem Teens Quickly Went From Children To Teens And Then Adults

We saw what happened with the Salem teens just a few years ago – Ciara Brady (Victoria Konefal) went from a child to a teenager, then an adult, in the blink of an eye. So did the other DOOL kids. There are currently no older children or teenagers on the soap, so expect that to change soon.

What do you think is going to happen with little Ari? Should the Udell twins continue playing Will and Gabi’s daughter, even after the time jump? Let us know your thoughts in the comments!