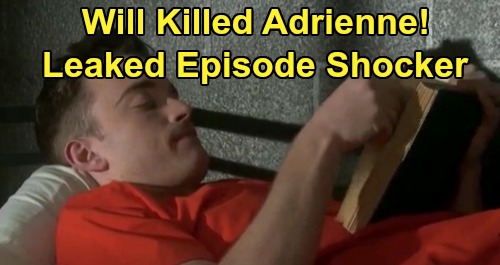 Days of Our Lives (DOOL) spoilers tease that Will Horton (Chandler Massey) will continue to battle guilt behind bars. DOOL fans know Will’s to blame for Adrienne Kiriakis (Judi Evans) death and landed in the slammer for it. Will also told Ben Weston (Robert Scott Wilson) that he admitted what he did and took responsibility. He gazed at Sonny Kiriakis (Freddie Smith) picture later and insisted he was so sorry.

What does all this mean? Many Days of Our Lives viewers are eager to get to the bottom of this mystery, so we’ll tell you everything we know about Adrienne’s death so far. An upcoming episode was recently leaked, which offers some great clues. In this leaked episode, Kate Roberts (Lauren Koslow) will pay Will a visit. They’ll discuss his situation and offer a few more details about what exactly went down.

Days of Our Lives spoilers say Kate will assure Will it was just an accident. She’ll point out that Maggie Kiriakis (Suzanne Rogers) and Nicole Walker (Arianne Zucker) forgave Eric Brady (Greg Vaughan). DOOL viewers will recall that Eric accidentally killed Daniel Jonas (Shawn Christian) while driving drunk and went to prison for it. Like Will, Eric was consumed by guilt and really struggled in the months that followed.

It would be strange for Days to do an exact repeat of that story, but they seem to be doing the same general idea. If Will had been driving drunk, Kate probably would’ve mentioned that as part of the Eric comparison. There’s a good chance Will was sober, but perhaps he was still driving recklessly or something along those lines.

That brings us to another clue about Adrienne’s demise. A flashback scene is coming up involving the night Adrienne died, which was about six months ago. Days of Our Lives spoilers say Justin Kiriakis (Wally Kurth) will beg Kayla Johnson (Mary Beth Evans) to tell him that Adrienne pulled through. At the hospital, he’ll talk about Adrienne surviving cancer and overcoming so much in her life so far. Justin will beg Kayla to tell him that Adrienne can survive this, too.

Unfortunately, Kayla will inform Justin that Adrienne’s internal injuries were too severe. That also backs up the car accident idea since internal injuries are typically part of the equation – at least in a particularly awful wreck. After Kayla and Justin are revealed as a couple in the present, they’ll talk about coming together after Adrienne’s death. They’ll reflect on how it was so easy that they almost didn’t even realize they were dating until it had already happened.

As for Will, another flashback will show how he urged Sonny not to visit him in prison anymore. Even now, Will doesn’t want to see the sorrow and anger in Sonny’s eyes. He knows he’s to blame, so he doesn’t want to make this harder on Sonny than it has to be.

Kate will also allude to Will’s trial during their chat, so we could see flashbacks of that at some point in time. Bottom line, Will was held legally responsible for Adrienne’s death, but he obviously didn’t mean to kill her. Sonny may be drifting toward Evan (Brock Kelly) right now, but Days of Our Lives spoilers say there’s still hope for “WilSon.” Forgiveness should come sooner or later, even if it’s difficult and painful.

Days fans won’t want to miss the twists and turns ahead. We’ll give you updates as other DOOL news comes in. Stay tuned to the NBC soap and don’t forget to check CDL often for the latest Days of Our Lives spoilers, updates and news.