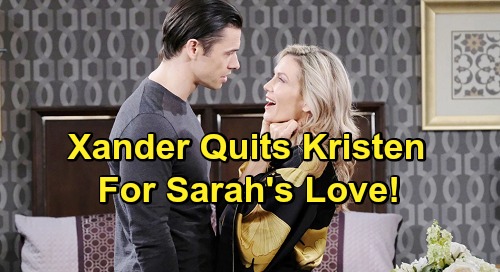 Days of Our Lives (DOOL) spoilers tease that Xander Cook (Paul Telfer) will decide he’s had enough of taking orders from Kristen DiMera (Stacy Haiduk). Xander has already pushed back against Kristen when he refused to kill Ted Laurent (Gilles Marini) and Kate DiMera (Lauren Koslow), which was an uncharacteristic move for Xander. In the past, Xander has been quite ruthless and wouldn’t have hesitated to carry out Kristen’s orders.

But things in Xander’s world have been changing. He’s certainly not anywhere near being redeemed at this point, but he’s made some big strides toward being a better person. He has developed an affection for Maggie Kiriakis (Suzanne Rogers) and really seems to care about her well-being. He and Maggie share a bond and Xander seemed genuinely upset to learn that Maggie nearly fell off the wagon again.

And then there’s Xander’s feelings for Sarah Horton (Linsey Godfrey). Although their relationship started with a drunken one-night-stand that Sarah would rather forget, Xander started having real feelings for Sarah. When he gave Sarah the necklace that he got from Ted, it really seemed to come from his heart. Plus, he genuinely seemed devastated when he later saw the same necklace on Chloe Lane (Nadia Bjorlin).

Xander Cook Is Sick Of Being A Henchman For Kristen DiMera

Well, it seems that Xander will soon be taking steps to get his life turned around. He’s already gained a position at Titan, although he came about getting that position by blackmailing Brady Black (Eric Martsolf). It seems that he wants to be a regular guy with a regular job, rather than going on being a henchman for Kristen.

And speaking of Kristen, DOOL spoilers indicate that Xander will soon end his business relationship with her. He won’t want that complication in his life anymore, nor will he want to do all of the evil things that Kristen demands of him. So, does that mean that we’ll see Xander actually make his gig at Titan work?

We think there’s a good chance that he will, because he’s highly motivated to become a better person…for Sarah’s sake. It seems that Xander’s long-term plan is to win Sarah over. Sure, she’s married to Rex Brady (Kyle Lowder) right now, but Xander probably figures that it won’t last, and he’d be right since Kyle Lowder will soon be leaving the show.

And that means that Sarah will soon be free and ready for a new relationship. And we bet that Xander will be right there waiting for her. It could be a tough sell, but who knows – Xander may actually have Maggie on his side when it comes to wooing Sarah.

It will be interesting to see what happens with Xander and Sarah going forward, but we should note that TPTB have indicated that these two have the potential for a lasting love story, so you never know. Once Rex is out of the picture, we could very well see a “Xarah” coupling take shape!

Do you think that Xander will turn his life around for Sarah? Stay tuned to DOOL and don’t forget to check CDL often for the latest Days of Our Lives spoilers, updates, and news.