Days of Our Lives Spoilers: Xander’s Secrets in Jeopardy – Will and Sonny Discover Shocking ‘Nicole’ and Kristen Clues 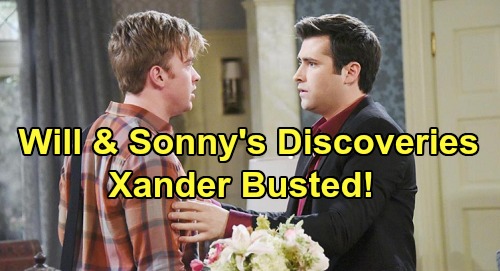 Days of Our Lives (DOOL) spoilers tease that Will Horton (Chandler Massey) and Sonny Kiriakis (Freddie Smith) will do some investigating.

Now that Will’s health crisis is over, DOOL needs a project to keep them busy. Fortunately, there are some major secrets to uncover in Salem. Several Days characters are starting to catch on and realize everything isn’t as it seems to be.

“Nicole DiMera” (Arianne Zucker) aka Kristen DiMera (Stacy Haiduk) has a lot at stake here. She took a huge risk by coming back to town in a Nicole mask and faking Holly Jonas’ (Harlow and Scarlett Mallory) death. We’ve got two secrets right there! Nicole isn’t really Nicole and Holly isn’t really deceased.

Will Horton And Sonny Kiriakis Team Up To Solve A Mystery

Of course, Stefan DiMera (Brandon Barash) is also facing a mountain of bogus accusations. Ted Laurent (Gilles Marini) is dead, but Kate Roberts (Lauren Koslow) still has some secrets of her own.

Kate’s connection to Will could prove crucial down the road, but Will and Sonny will focus on another suspicious Salemite first. Xander Cook (Paul Telfer) will be their main investigation target.

Days of Our Lives spoilers say Sonny will team up with Will to solve a mystery. They’ll hope to learn exactly what Xander’s been up to and find out if he’s still scheming.

What Will The Pair End Up Discovering In Xander Cook’s Briefcase?

Will and Sonny will manage to get their hands on Xander’s briefcase, so they’ll poke around a bit during the week of August 12-16. They’ll snoop in hopes of busting Xander and getting rid of the threat.

Xander’s been behaving fairly well lately, but drama’s always just around the corner with this guy. Sonny and Will won’t trust him, so they’ll want to know everything there is to know. The week of August 19-23 will rev up this investigation even more. It sounds like Will and Sonny’s teamwork may off with some surprising clues. Will they get a hint about Xander’s link to Kristen?

That could be step one toward figuring this “Nicole” mess out. Even if Sonny and Will aren’t the ones to crack the case, they could play significant roles in exposing the truth. All these Salemites just have to start bringing their puzzle pieces forward and fitting them together!