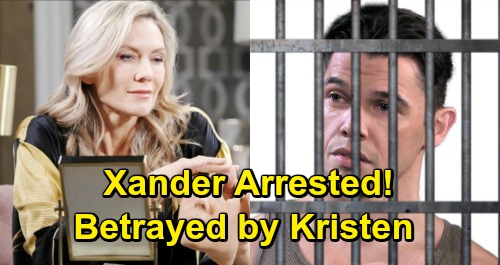 Days of Our Lives (DOOL) spoilers tease that Xander Cook (Paul Telfer) will face an outcome he should’ve seen coming. If you’re going to team up with Kristen DiMera (Stacy Haiduk), you’d better expect to get burned! Kristen will indeed make life difficult for her partner in crime soon, but it’s worth mentioning that Xander betrayed her first. He didn’t kill their hostages like she asked, so Kristen will at least have a reason.

Sarah may be married to Rex Brady (Kyle Lowder), but Xander still has feelings for her and hopes for their future together. That’s why Xander will be enraged when Kristen turns on him. She’ll stab him in the back by selling him out to the cops somehow.

It looks like the hostage situation will reach a boiling point after Kristen reveals herself to Kate and Ted. Hope Brady (Kristian Alfonso) will discover the captives after following Xander, but it seems Kristen will somehow wiggle out of trouble. She’ll make sure Xander takes the blame for this mess in the DiMera tunnels. As for Ted and Kate, they may be blackmailed into keeping quiet about Kristen.

Regardless, Kate and Ted will score their freedom while Xander gets locked up. On July 15, Days of Our Lives spoilers say Xander will get arrested, so he’ll fume over Kristen’s disloyalty. He’ll be in a tight spot since he can’t divulge the whole story. Xander would be in far worse trouble if his role in faking Holly’s death were exposed. It seems Xander will just go down for kidnapping and related charges.

However, Xander’s a pretty crafty fellow. We have no doubt that he can get out of this jam, too. Days of Our Lives spoilers say Xander will focus on a new mission. He’ll be determined to make Kristen pay for hanging him out to dry. Xander’s revenge will be swift and brutal, so Kristen had better watch out!

It sounds like the drama’s about to heat up in Salem. We’ll give you updates as other Days news comes in. Stay tuned to DOOL and don’t forget to check CDL often for the latest Days of Our Lives spoilers, updates and news.