BY hellodrdavis on October 3, 2019 | Comments: one comment
Related : Days of Our Lives, Soap Opera, Spoiler, Television 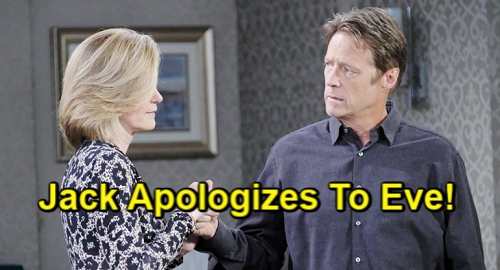 Days of Our Lives (DOOL) spoilers tease that Jack Deveraux (Matthew Ashford) will be feeling grateful. As DOOL viewers know, he’s just gotten his memories back of his life with Jennifer Horton (Melissa Reeves) and his kids.

He’s happy to finally be reclaiming his life, and he wants nothing more than a future with Jennifer, his children, and his grandchildren, but it seems that he’ll have some unfinished business to deal with first.

That unfinished business will be all about Eve Donovan (Kassie DePaiva), who Jack is presumably still married to. The two are estranged, as Jack decided to divorce Eve after it came out that she had seriously sabotaged his efforts to reclaim his memories.

As DOOL viewers will remember, Eve burned Dr. Wilhelm Rolf’s (William Utay) diary so that Jack couldn’t have the memory-inducing serum made, and she outright destroyed a batch of serum that Jack had created.

Well, it seems that Jack will want to end things with Eve once and for all. But his reaction to her might come as a surprise to DOOL viewers. According to Days of Our Lives spoilers, Jack will sit down with Eve for a talk during which he will apologize to her. Exactly what he apologizes for remains to be seen, but Jack knows that he wasn’t acting himself before he got his memories back, and he’ll probably feel bad for Eve’s plight.

After all, it’s kind of understandable why Eve didn’t want Jack to get his memories back. Nothing really condones how she handled the situation – she never should have destroyed the serum or Rolf’s diary – but Jack may feel like he understands why she so strongly resisted him getting his memories back. After all, she knew that the “real” Jack would surely leave her and go back to Jennifer and his family.

Jack Deveraux Closes A Chapter Between Himself And Ex-Wife

At any rate, Jack will say his peace and apologize to Eve, and it will end up closing a chapter between the two of them. Jack will want to go on with his life and put a lot of things behind him – including how he acted toward his family and friends while he was with Eve. Of course, Eve will surely see the writing on the wall and won’t fight Jack on the divorce. She knew this was coming.

The great news here is that Jack and Jennifer fans will get their happy ending as the super couple reunites and gets back to living their life together. Are you glad to see Jack and Jennifer reunited? Stay tuned to DOOL and don’t forget to check CDL often for the latest Days of Our Lives spoilers, updates, and news.