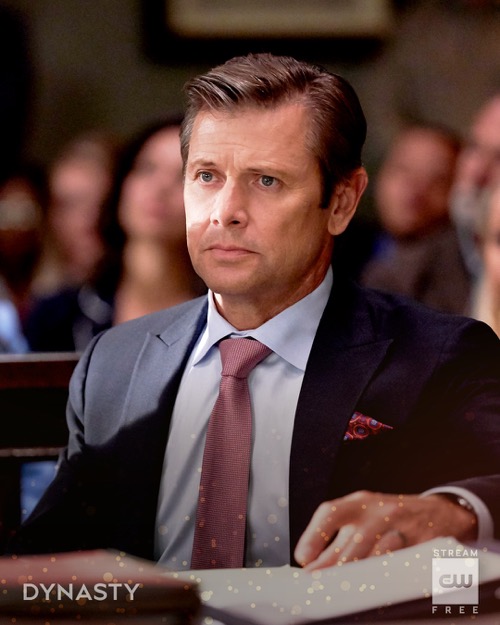 Tonight on the CW Dynasty the reboot of the 1980 series that followed the Carrington family airs with an all-new Friday, December 6, 2019, episode and we have your Dynasty recap below.  In tonight’s Dynasty season 3 episode 8 “The Sensational Blake Carrington Trial,” as per the CW synopsis, “In the mid-season finale, Blake’s (Grant Show) trial begins, and every Carrington and family associate gets pulled into the fray.”

Tonight on Dynasty, Andres is served by D.A Brien against Blake, she offers him full immunity if he cooperates but he refuses. Blake doesn’t seem to be worried during breakfast, Fallon tells him she is served to testify and he threats her magazine launch so she agrees to not say anything incriminating against him. In a turn of events, Blake’s lawyer tells him to take a rain deal because they have someone on the inside testifying to place him at the murder scene and he asks Andres to find out who the rat is.

Monica and Dominique continue to argue about her not being truthful with being related to Vanessa she asks Jeff to help her get exposure for Vanessa but he declined to help to make Dominique look to Blake with help on getting Vanessa a record deal. Dominique attempts to enter the courtroom for the trail but isn’t on the list to get in.

During the trial, the D.A gives her opening statement making her case that Blake is a murderer. Culhane testified against Blake on the stand and accuses him of killing his father on the stand causing an outburst.

Andres begins his questioning of Blake’s staff to find out who the rat is and gets Intel that it may be Kirby, he begins to follow her.

Adam begins to get some of his vision back but is worried that it’ll stop Nadia from working with him so he decides to take a photo of him biting himself making Nadia stay around longer.

Nadia confessed to Fallon that she is beginning to fall in love with Adam, Cristal walks into their meeting and says she wants apart of Fallon’s plan or else she’s going to tell Blake.

Fallon takes the stand and is asked if she thinks her father is capable of murder and she dances around the question but says yes she believes he is, Blake’s lawyer, in turn, goes after Fallon on the stand after what she has said against him.

He makes her seem like a spoiled rich brat who’s benefited from her father’s property and money and is upset that she’s been cut out of his will, this upsets Fallon and she had an outburst throwing the gavel at her father, the judge warns her to calm down or she’ll be held in contempt.

Adam overhears Nadia on the phone with someone telling the person she misses them and they plan to meet up at a hotel room, Adam asks Nadia who it was and she says nobody important. It turns out to be Fallon’s plan and lures him outside a room where Cristal and Nadia are fake arguing about her sleeping with Blake.

This causes Adam to go on a drinking binge and he wakes up with his vision and he proceeds to set the wine vineyard field on fire. Fallon rushes to the vineyard and tells Adam about her plan and her and Liam discovers he can see, Liam gets his memory back and remember Adam is the one who hit him and almost killed him and they fight.

Liam is reporting on the trial for Fallon’s magazine but is upset that he writing about her outburst.

Anders tells Blake that Kirby is the rat, Blake wants to deal with her and they decide to try and figure out how to deal with it. Blake goes behind Anders’  back and gives Kirby a plane ticket and tells her to leave the town she denies being the rat but he doesn’t care to hear her out. Blake tells Anders what he did and this upsets Andres promoting him to consider the full immunity deal from D.A brown.

Monica invites Vanessa on a trip to NY. Fallon breaks into her own company office and smashes the computers so she can’t cover the trial and gets back in her father’s good grace and stops Liam from writing the article.

Anders takes the stand and testifies that he killed Mac and not Blake which surprises the courtroom and D.A brown since she thought Anders would testify against Blake. Blake is happy about their plan and they discuss what’s taken place with Kirby and they make amends.

Vanessa breaks the news to Dominique about her leaving for NY. Fallon also admits Liam about the break-in at the magazine office she vows to become a better person and apologizes to him. A surprise witness takes the stand wh is Jeff’s new wife, Alexis Carrington Colby