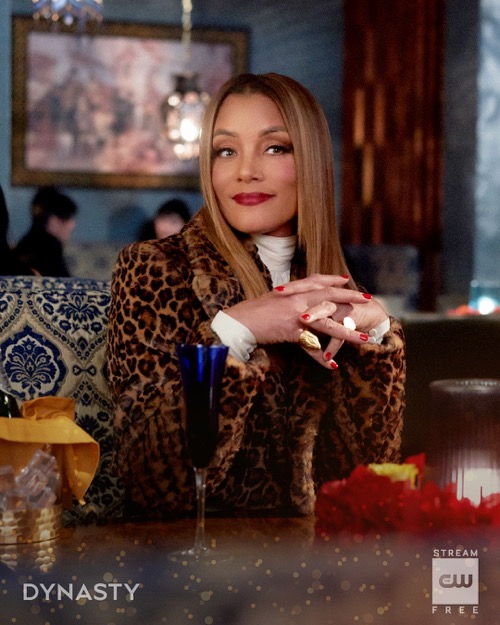 Tonight on the CW Dynasty the reboot of the 1980 series that followed the Carrington family airs with an all-new Friday, November 15, 2019, episode and we have your Dynasty recap below.  On tonight’s Dynasty season 3 episode 6 “A Used Up Memory,” as per the CW synopsis, “Fallon ponders shaking things up with her company when Dominique presents her with a business proposition.

Blake and Cristal focus on the trial, and Kirby focuses on finding Sam a man. Liam asks Fallon for a favor. Meanwhile, Jeff keeps a close watch on Blake.”

Fallon has moved on. She told Liam she was going to do it and she was. She was moving on with Evan Tate. They were having fun for now and she told Monica that she was more focused on her career. Fallon wanted to relaunch Fallon Unlimited. It was a fake company before, but Fallon wanted to make it real. Its why she plans on relaunching everything. Fallon has Evan helping her with Fallon Unlimited and while she was at it she was also looking to the recording company she co-owns with Monica.

Both women were approached by Monica’s mother who wanted them to sign her new artist. Dominque talked up Vanessa and she said she was the next hit. She put a lot of thought into Vanessa’s career. Dominqiue suggested Vanessa date Culhane for the clout it would give her and Vanessa seems willing mainly because she was interested in Culhane already. He did save her life after all. He stopped a couple of goons from threating her at the hotel launch and they’ve been lightly flirting ever since.

It was great for Vanessa’s career. Thereby making it great for Dominque’s career and so she really had Monica and Fallon considering the idea. They were thinking it over when Liam somehow reentered the picture. He’s been getting his memory back and he’s wondering if Fallon could help him. He asked Fallon if they could go out to dinner together in the hope of it helping him to remember. He had to guilt-trip her into doing it and that created a problem for Fallon. She canceled plans she had with Evan and his mother.

Fallon came up with some crap excuse of how she was busy. Evan acted all fine to her face and then freaked out when she wasn’t looking. Fallon in the meantime wasn’t hiding her date from anyone else. She had to tell Monica because she wasn’t paying attention to their business meeting and so Monica helped her figure out what she was going to wear, but someone overheard them. Someone like Adam’s nurse Natalia. Natalia and Adam have really bonded. They were now almost friends and so Natalia wanted to help him any way she could.

She even told him what she overheard. Natalia thought it would just be great gossip and it was so much more than that. Adam didn’t want Fallon and Liam getting back together. He wanted to work against them as much as he wanted to work against his stepmother. Natalia promised to help with that as well and so first they dealt with Fallon. Fallon’s date with Liam was only going to work if she wasn’t caught by her new guy Evan. Adam came up with the idea that they should get Evan to the house at the same time as Liam and so he was the thinker.

Natalia was the doer. Both of them together created a diabolically team and so the first person they ruined was Fallon. Fallon was seen by Evan with Liam. Evan had the chance to make a scene and he chose to first just watch. He watched Fallon and Liam have dinner together. The two were talking about what Liam could recall and their conversation eventually led Fallon to believe this wasn’t a date. She thought it was and that Liam’s memory was merely a cover. Then she found out the brutal truth.

Liam didn’t care about her. His feelings didn’t suddenly come back and so their “date” wasn’t a date. Liam was sorry if he misled her. Not to say that he did. Liam told her exactly what he needed her and she was the one that ran with it. Fallon felt stupid about it afterwards. She walked away from Liam and Evan used that moment to swoop in. He confronted Liam. He told Liam to stay away from Fallon and that he wasn’t going to tell him twice. Evan probably thought he did a great job with bullying Liam, but he made sure not to mention it when he told Fallon he was there at the restaurant.

Evan supposedly called by Fallon assistant saying she wanted to meet for drinks. Only that wasn’t the real assistant. It was Natalia and Adam and so Adam’s plan did work even if it didn’t ruin the date. It did annoy Fallon. She had to explain herself and she told Evan he was her future. The two of them had put the dinner date with Liam behind them and Fallon had a word with her brother. She had no idea how he did it, only she knew it was him and she warned him that she was going to pay him back.

Adam also tried to ruin Cristal’s day. He was just a little slow to catch her because Jeff got there first. Jeff found out Blake escaped house arrest and he had the whole city secretly looking for him while Blake was doing his best to sneak back into the house. It was a miracle when Blake made it back without being caught. Jeff knew he escaped and so he confronted him. He came storming into the house and Adam lost his best chance at getting back into the will because he was too busy making out with his nurse to act as his father’s guard dog.

Blake had to deal with Jeff himself. It didn’t look good for Blake because Jeff wasn’t the type to let it go and so Blake knew that he’d have to do something about Jeff eventually. But if the house hadn’t been busy enough, Fallon came back with a friend. She surprisingly came back with Liam because Liam told her he remembered he loved her and so now they’re back together. It happened quite publicly too. Fallon embarrassed Evan and Evan seems the vengeful type. He took a sample of her and there’s no telling what he could do with it.

And Vanessa let it slip that Dominque is her stepmother to Culhane and she begged him not to say anything to either Monica or Jeff because Dominque has some kind of plan set up.