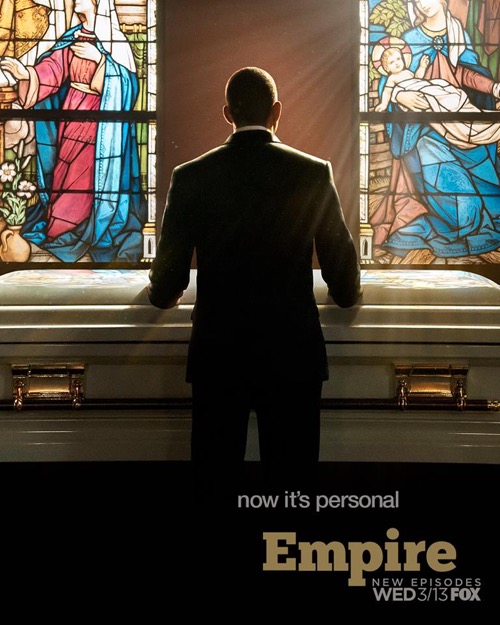 Tonight on FOX their blockbuster drama Empire airs with an all-new Wednesday, March 13, 2019, episode and we have your Empire recap below. On tonight’s Empire season 5 episode 10 Spring Premiere called, “My Fault Is Past,” as per the FOX synopsis, “With the control of Empire within reach again, the Lyons must pull out all the stops to prove Lucious and Becky’s innocence in the data-mining scandal.

Meanwhile, Cookie struggles with Lucious’ past and Jeff Kingsley’s place in it, Jamal and Kai try to figure out where they stand and a mystery begins to unravel.”

Following Jeff’s announcement that Lucious is his father, Cookie clears a back room so she and Lucious can talk. He tells her he was young when Jeff was born. Cookie doesn’t care if he is his son. They need to take him down. She asks him if he is with her. Lucious tells her “of course I am.”

The Lyons all talk about what they need to do over dinner. Lucious and Cookie tell the boys that they are going to buy Patel’s shares and partner with Giselle. Jamal feels like they are going backward. They tell him they are not. They are Lyons and Empire is theirs.

Jamal meets with Kai to get help and information on the data mining story. Kai doesn’t want to talk about that. He wants him and Jamal to square away their own issues. But Jamal is focused and not on him.

Thirsty arrives at the Lyons to tell them Jeff is suing them for $1 million. He heads to meet Becky who is freaking out. Kai arrives. He has a source to someone who could be working for Jeff.

Maya wakes Hakeem in the middle of the night with her ballet.

The next day, Becky wallows while Jamal tries to cheer her up. He plays a new song for her that he has been working on. Meanwhile, Andre and Lucious meet with Kai and his source. The man won’t talk so Andre hangs him out a window. Kai is beside himself, screaming for them to stop. The man finally talks. Jeff did put him up to sending out emails.

Cookie’s sister shows up. Although they have been fighting, she has heard the news and wants to help.

Jamal sings for the students at his old high school, cheering him and Becky up. Meanwhile, Lucious goes to see Jeff. He tells him he can sign a press release of they can go public with the news that Jeff sold all the users on his app to a journalist.

Cookie sits with both her sisters and talk about what they thought their families were. Cookie didn’t see this coming. Now she has to face it all. Later, she arrives to meet Tracy, Jeff’s mother face to face in the hospital.

Tracy tells Cookie that she was already pregnant when Cookie first met Lucious. That is all Cookie wanted to know. When she attempts to leave, Tracy tells her that she is the reason she lost everything. Cookie cannot believe her. She didn’t make her do crack. And while she was free, Cookie paid her own price behind bars for 17 years.

Giselle holds a press conference where Lucious and Cookie are welcomed back to Empire. While Cookie makes a speech about being there for one another and the community being Empire, Lucious just wants to make the announcement that they need to party! After, Lucious tells Jamal how Kai helped clear his name.

Hakeem brings one of his friends to rehearsal to meet Maya. His friend performs an impressive dance routine of hip-hop and ballet fusion. Maya is thrilled.

Jamal goes to thank Kai who tells him his family is scary and he cannot be around them. He is headed back to London and wants him to come with him. Jamal tells him he is a Lyon and hands him back his engagement ring.

At the Empire party, Andre brings Terry to meet Cookie. Hakeem takes the stage to perform. Lucious is happier than ever but Cookie isn’t feeling it. Jeff calls. Lucious meets with him in the office. He tells Lucious he has made a program that will erase all of the archived music at Empire. He hits the button and starts deleting files. He knows all about the London server. Lucious starts to worry. He begs to know what Jeff wants. He would have never left him alone, in the world. Jeff doesn’t want to hear more. He leaves. Lucious sits and cries.

In the car, Andre tells Terry that his relationship with God is complicated. He starts to bleed from the nose. Terry tells him to pull over. He drives into a car as he begins to choke.

Jamal sits to play a mellow song alone. Across town, Cookie tells Lucious that Empire was built on drugs and pain.